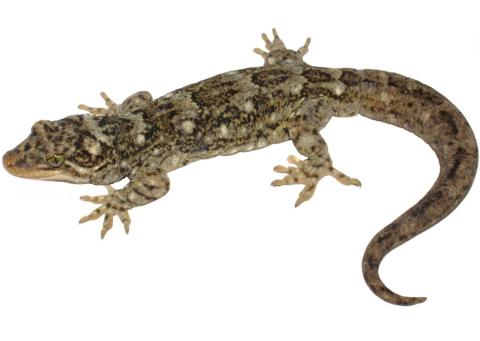 Length: SVL up to 165mm, with the tail being equal to or shorter than the body length

A physically robust species with a thick head, large trunk and tail. They are the largest of New Zealand’s geckos reaching up to 160mm in snout-to-vent length, and over 30cm in total length.

Duvaucel's geckos are characterised by dorsal surfaces which are olive-brown to olive-green with pale and irregular crossbar-shaped splotches down the back, usually from the nape of the neck to the base of the tail. The underside is paler than the back, usually a pale uniform grey but can be softly blotched. Duvaucel’s gecko have a pink mouth and tongue. The forehead is slightly concave with yellow eyes and large oval openings for the ears.

Duvaucel’s gecko have a high number of lamellae on the feet with long toes (lamellae are a structure on the footpads which allow adhesion onto surfaces). Cloacal spurs (an outgrowth of bone and enlarged scales serving primarily as a grip during mating) are arranged in a series of 3-4, with pre-cloacal and femoral pores extending in a narrow series along the underside of the thighs.

There are significant genetic and morphological differences between Duvaucel's geckos and the 'southern Duvaucel's gecko' (Hoplodactylus duvaucelii "southern") - a separate species which occurs in the South Island: Northern Duvaucel's geckos are generally larger (110-161mm SVL), more robust, have a proportionately longer snout, and less-defined markings. Individuals from the southern populations are generally smaller (95-120mm SVL), have a proportionately shorter snout, a more pronounced brillar fold (hood of scales above the eye), and well-defined blotched markings. Infralabial scales become gradually smaller in northern animals versus usually abruptly smaller after the 4th infralabial in southern animals.

Vocalisation of Duvaucel’s gecko has been variously described as squeaks, squeals, croaking and coughing.

Duvaucel’s gecko are an extremely long lived species with ages of over 60 years reported.

Duvaucel’s geckos were once widespread throughout the North Island of New Zealand. Unfortunately due to the impact of human settlement and the introduction of predatory mammals, the species are now restricted to several offshore islands off the east Coast of the North Island, from the Bay of Plenty northwards. They inhabit forests, bluffs, cliffs, and coastlines in lowland areas.

A related species the 'southern Duvaucel's gecko' (Hoplodactylus duvaucelii "southern") occurs on several islands in the Marlborough Sounds but was formerly widespread in the South Island.

A largely nocturnal species, Duvaucel’s gecko can remain active at low temperatures but actively regulate their body temperature by sun basking. During the day they tend to hide in tree hollows, under logs, stones or bark, rock crevices or petrel burrows.

Duvaucel’s gecko are tolerant of members of the same species and form social groups of 2-8, groups usually contain only one male.

Duvaucel’s gecko give birth to live young and have a low annual reproductive output. Gestation has been variously reported as between 5 months to longer than a year. Individuals become sexually mature at about 7 years old.

Duvaucel’s gecko harbour a number of ecto and endoparasites (internal and external). In most cases ectoparasites (mites) have a negligible health impact, although heavy infestations can lead to vomiting, weight loss, tissue damage, secondary bacterial infection, or in serious cases anaemia or dysecdysis (difficulty sloughing skin).

protozoa (Haemogregarina sp.) are also found in the blood of this species.

DOC (the NZ Department of Conservation) have classified Duvaucel’s gecko as ‘relict’, with a population of >20,000 mature individuals and a stable or increasing population (>10%).

Several reintroductions were established or augmented through a breed-for-release programme run by Massey University in Auckland.

The species was erroneously named after Alfred Duvaucel, a French naturalist who explored India. Museum specimens taken to London were credited to him, only later were the animals found to have come from New Zealand. 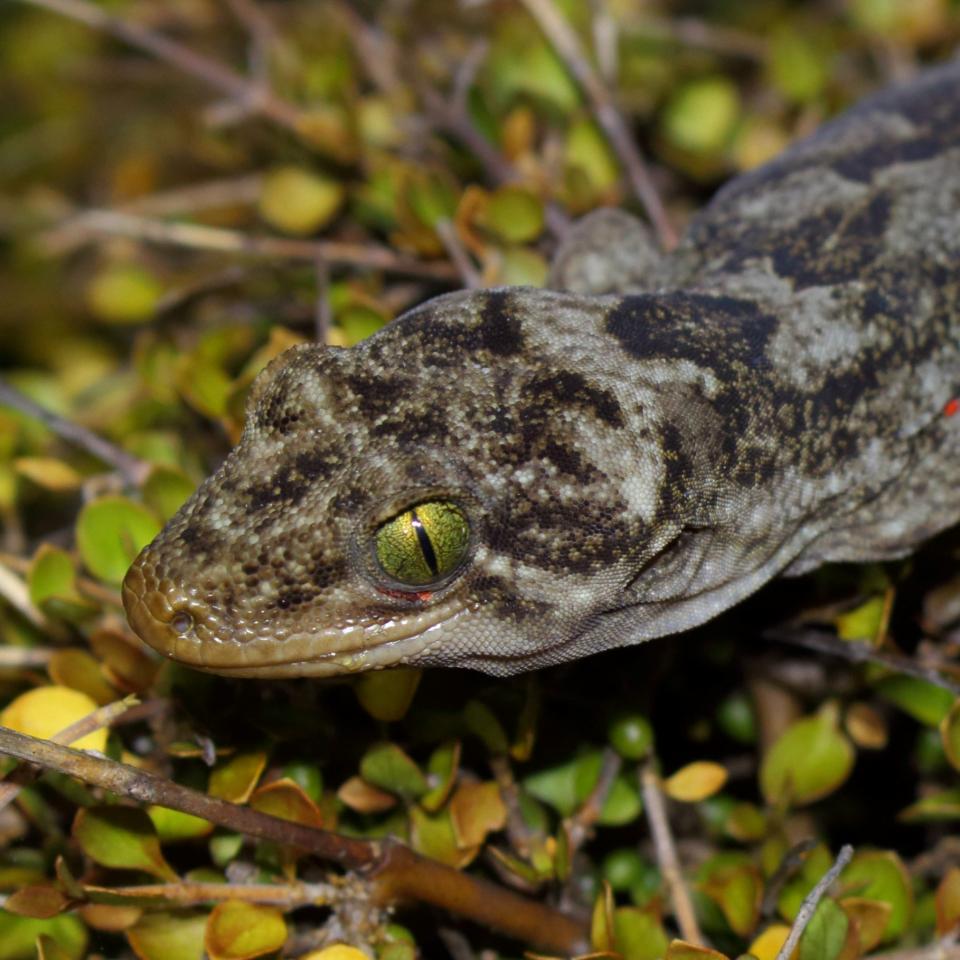 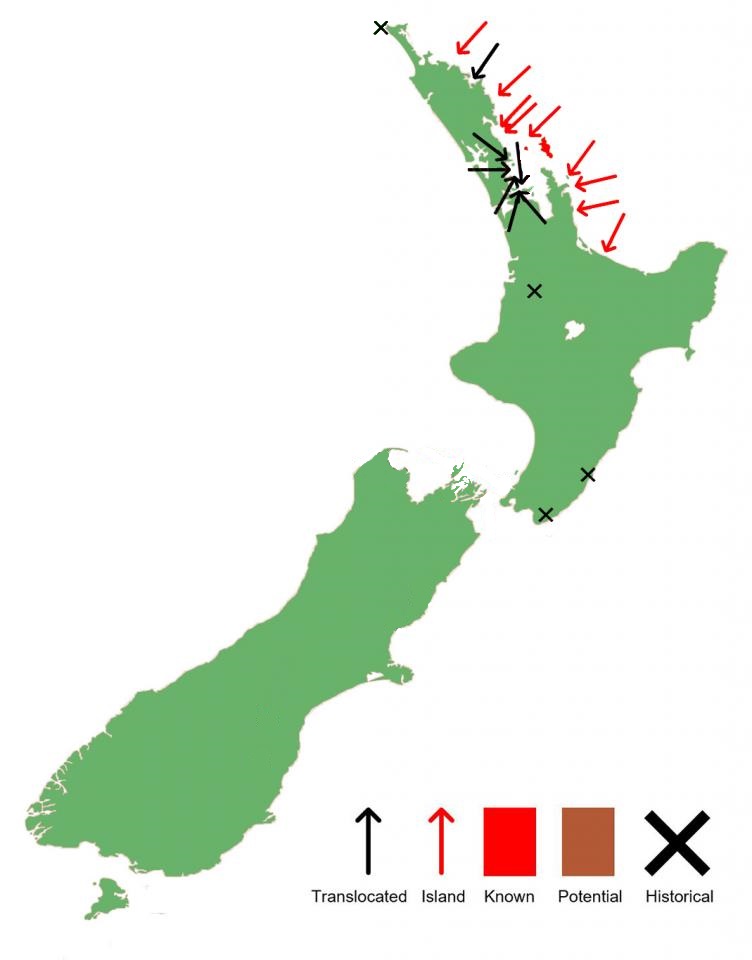 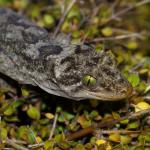 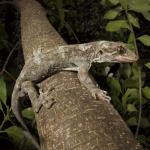 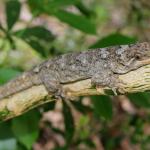 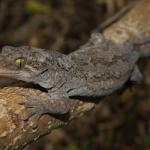 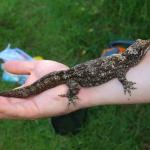 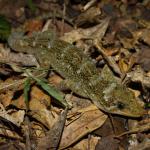 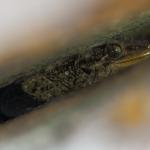 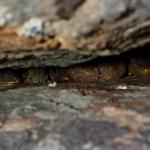 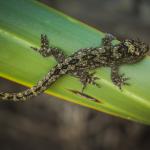 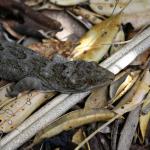 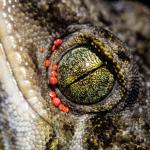 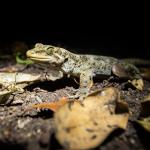 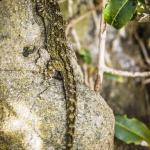 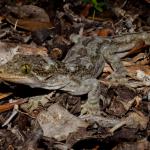