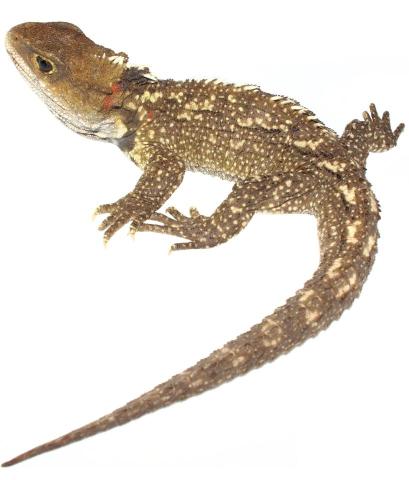 Length: SVL: 200-280mm, with the tail being equal to or slightly longer than the body length

Tuatara are the sole surviving representatives of the order Rhynchocephalia. Despite a close resemblance, tuatara are not lizards. Informally known as "living fossils", they are thought to have remained essentially unchanged for 150 million years. The tuatara is New Zealand's largest endemic reptile, reaching 200-280mm SVL (snout-vent-length). Until recently, two species of tuatara were recognised: Sphenodon punctatus (Northern tuatara) and Sphenodon guntheri (Brother's Island tuatara), however, taxonomic revision has recently synonymised them into a single species:S. punctatus.

Tuatara are generally olive green to slate grey in colour with a fine speckling across the body, though some individuals (particularly in the northern part of their range) may have red, orange, or yellowish brown tones. Tuatara have relatively soft skin and undergo ecdysis (loss of skin) at least once a year, allowing the colouration to change over the animals lifetime. Tuatara are sexually dimorphic, with males being larger than females. A crest of spines runs along the length of the back and tail (tuatara means ‘peaks on back’ in Maori), and the crest is more pronounced in males.

Adults have a ridge running from each eye to the snout and no external ear hole. Tuatara have a parietal or ‘third’ eye which is photoreceptive and aids in setting circadian and seasonal cycles. Tuatara have a unique tooth arrangement with the upper jaw having two rows of teeth, while the lower jaw has only one row which slides between the two upper rows. The teeth are actually serrated protrusions of the jaw bone. Tuatara are the most unspecialised amniote in the world with the most primitive heart of any reptile. The lungs have only one chamber with no bronchi (branches or tracts within the lung).

Tuatara are present on offshore islands in the Cook Straight and on the east coast of the North Island. In recent years tuatara have been introduced into predator proof ‘mainland islands’ such as Zealandia sanctuary in Wellington. There are very few places where you can see tuatara in the wild with the majority of the populations residing on protected offshore islands, off limits to the public. To see tuatara, visit one of the many captive facilities we list on the website, or one of the publicly accessible sanctuaries (e.g. Tiritiri Matangi Island, Motuihe Island, Matiu/Somes Island, Zealandia, Orokonui) where you may be lucky enough to see one sunbasking alongside a track!

Adult tuatara are nocturnal (though they will sun bask), while young are diurnal; an evolutionary development which is thought to have arisen because adult tuatara will cannibalise young. The species are able to remain acitve at temperatures as low as 5°C, but will commonly hibernate during the winter. Tuatara inhabit coastal forest and clearings, using burrows for shelter (either sequestering bird burrows or digging their own), sharing habitat with sea birds such as shearwaters and petrels.

Tuatara are solitary, however, a number of tuatara will share a burrow system. Both sexes will defend their tunnel segment and territory fiercely. Males will make croaking sounds during confrontations.

The reproductive rate of tuatara is very slow with females laying a clutch of eggs every 4 years. Mating takes place in midsummer; during courtship the male will raise his crest, deepen his colour and parade for the female. Gestation is 11 – 16 months, after  hatching tuatara take around 13 years to reach full maturity. Tuatara have temperature dependent sex determination with more males produced when eggs are incubated at a warmer temperature, while more females are produced when incubation occurs under cooler conditions.

Three quarters of their diet is invertebrates, and the remainder consists of smaller lizards, birds, and other organic material. Tuatara teeth are not replaced throughout the lifetime; elderly tuatara often switch to softer prey as their teeth wear down.

Ticks can infest tuatara and are difficult to see as they blend with the colour of skin and scale pattern. The nematode Hatterianema hollandiae and several types of protozoa have also been found in tuatara. Known host for the blood paraite Hepatozoon tuatarae.

DOC classify tuatara as 'relict' with more than 20,000 mature individuals, a stable population or increasing by more than 10%.
Click here for a copy of the species RECOVERY PLAN.
Click here to learn about CAPTIVE MANAGEMENT AND HUSBANDRY of tuatara.

Webster, R. K. E. (2018). The epidemiology and pathology of Paranannizziopsis australasiensis in New Zealand reptiles: a thesis presented in partial fulfilment of the requirements for the degree of Master of Veterinary Science in Wildlife Health at Massey University, Palmerston North, New Zealand (Doctoral dissertation, Massey University). 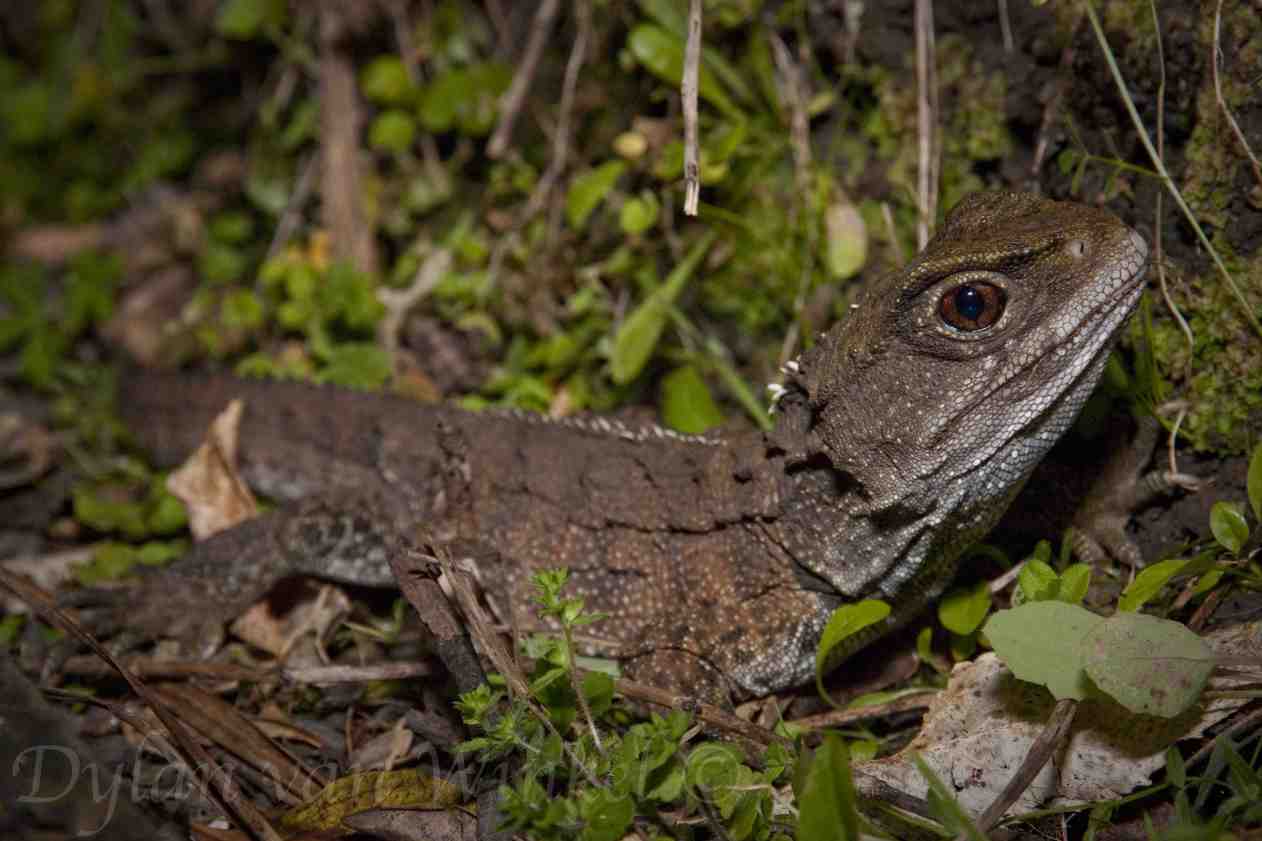 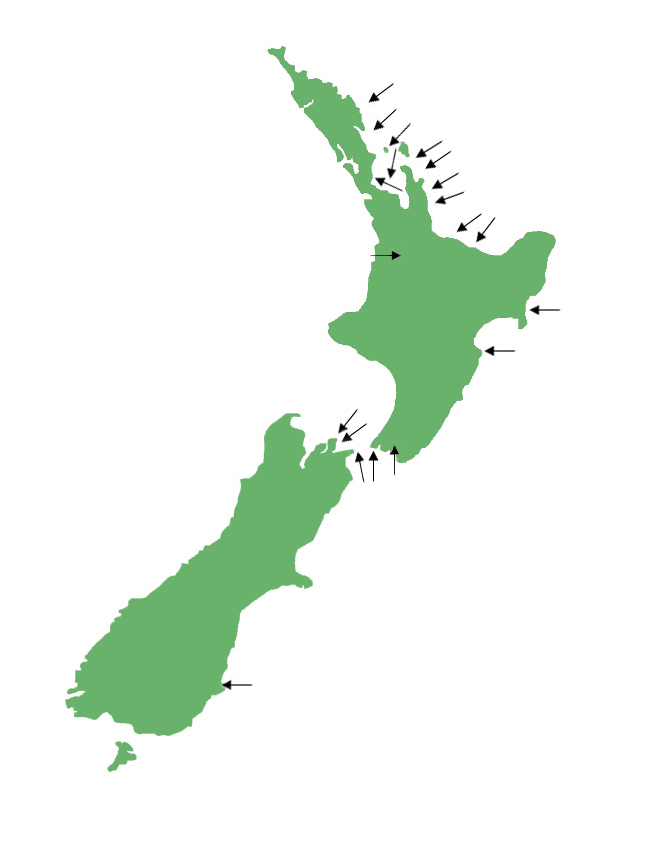 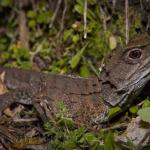 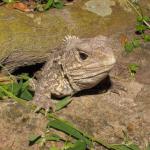 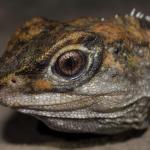 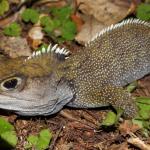 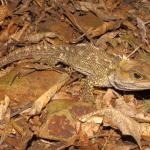 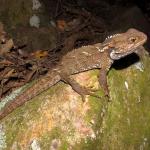 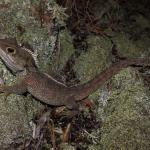 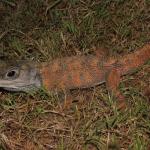 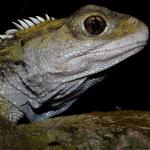 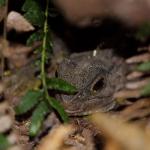 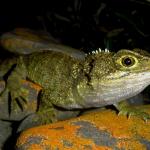 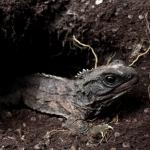 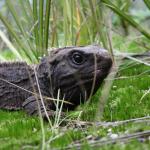 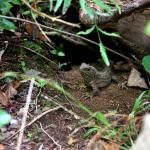 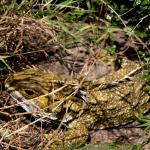 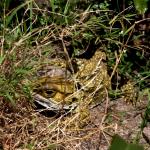 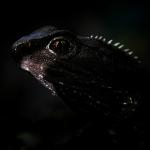 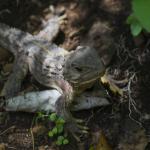 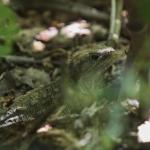 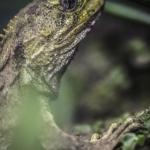