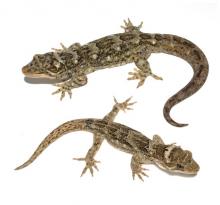 Duvaucel's geckos are New Zealand's largest species of gecko. They are highly vulnerable to predation by introduced mammals so are now only found in a few pest-free areas (mainly offshore islands).

In captivity they can be relatively easy to maintain, although prefer larger prey-items than those most widely use for smaller species. This species appears to be quite prone to metabolic bone disease so care needs to be taken to ensure that these geckos have adequate basking spots and good levels of calcium in their diet. These geckos actually comprise two separate clades with genetic and morphological differences; 'northern' Duvaucel's geckos (from islands off the northeast coast of the North Island; and 'southern' Duvaucel's geckos (from islands in Cook Strait and the Marlborough Sounds). These will likely be described as separate species in the near future, and should be maintained separately in captivity to avoid the risk of hybridisation.