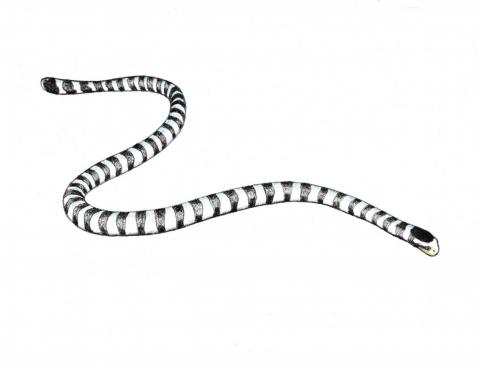 Marine snakes are beautiful, highly venomous, eel-like reptiles that typically live in the coastal waters of the world’s oceans. They are distinguished from other groups of snakes by their laterally-flattened paddle-like tales and in some cases bodies.
In general, marine snakes are split into two groups; the Laticauda (sea kraits), and the remaining Hydrophiinae (true sea snakes).

New Zealand’s waters represent the far southern extent for marine snakes in the western Pacific Ocean, with most species that reach our shores likely being the result of ocean storms washing animals outside of their normal distribution. Four species have been recorded along our coastline, however, only the yellow-lipped sea krait and yellow-bellied sea snake, have been observed on multiple occasions.

Most of the species that reach New Zealand are considered to be vagrants (rare visitors) due to their life history. The sea kraits being semi-aquatic and oviparous (egg-laying) rely on land for both breeding and nesting, and are thus unlikely to be residents due to the lack of suitable habitat. The warm waters of the north, particularly around the Kermadec islands may represent birthing sites for the live-bearing yellow-bellied sea snake, making this species potentially the only marine reptile to breed in New Zealand.