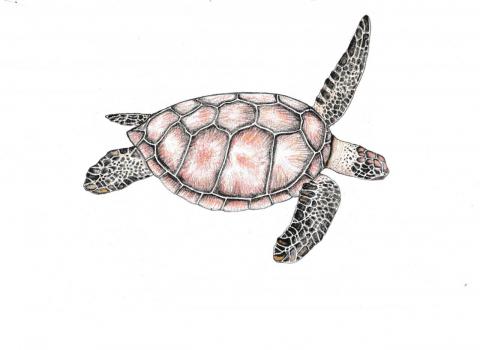 Marine turtles are an enigmatic group of large reptiles beautifully adapted to an oceanic lifestyle. They are characterised by the presence of large flattened forelimbs (flippers), and in all but one species, a large bony shell consisting of the carapace (upper shell), and plastron (lower shell). Marine turtles are an ancient lineage having emerged sometime between the Late Jurassic and Early Cretaceous, with the most basal member Desmatochelys padillai appearing in the fossil record 120 million years ago.

Marine turtles are currently represented by 7 species sitting within two families; the Cheloniidae comprising the green, loggerhead, hawksbill, flatback, olive ridley, and kemp’s ridley turtles, and the Dermachelyidae a monospecific family represented by the leatherback turtle.

New Zealand’s waters are visited by all but the flatback and Kemp’s ridley turtle. Generally considered to be the southern limits for these species, most are considered vagrants (outside their typical range), although, two species; the green turtle (Chelonia mydas), and the leatherback turtle (Dermachelys coriacea) are known to occur in New Zealand waters in large enough numbers to be classified as resident, and migrants respectively.

During the Eocene (56-33.9 mya) New Zealand’s waters and beaches represented part of the range of, and nesting sites for Psephophorus terrypratchetti - a 2.3-2.5-metre-long marine turtle visually similar, and distantly related to today’s leatherback turtle.