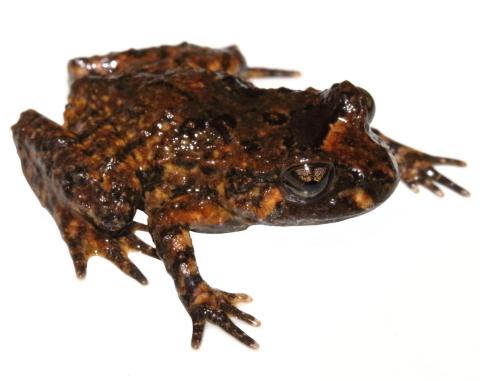 The Hochstetter’s frog is Aotearoa/New Zealand's most widespread, and commonly encountered native frog species. Whilst still in decline they have fared much better than their close relatives (the Hamilton's and Archey's frogs), and still occupy a significant proportion of their former range. This may be attributed to their much more aquatic nature; being almost exclusively associated with small forested catchments or seepages.

Generally, Hochstetter's frogs match the mossy and gravel-like tones of their environment, exhibiting greenish-brown to reddish-brown dorsal (upper) surfaces, punctuated by dark markings and numerous warts. The ventral (lower) surface is yellow-brown. Their forelimbs lack any webbing, whilst their hindlimbs are characterised by partial webbing. As with other Leiopelma frogs, they do not have visible tympana (disc-shaped external eardrums).

Hochstetter’s frogs are similar in appearance to our other native frog species but can be differentiated by their squatter build, aquatic nature, and the presence of webbing (although only partial) on their hindlimb. They co-occur with the terrestrial Archey's frog (Leiopelma archeyi) on the Coromandel Peninsula, and in the King Country, but are much larger in size.

The larvae of the Hochstetter’s frog resembles a small round fish, lacking fins.
Their colouration changes as they age, but generally they have pink dorsal (upper) surfaces and yellowish-orange ventral (lower) surfaces. Their heads and limbs develop darker tones (various shades of grey) as they mature.
After about 1 month has passed the larvae have fully-developed limbs, with a 6-10mm SVL, and tails ranging from 10-14mm. At this stage, they still retain the larval colouration.
2 months after hatching they are considered froglets, having fully resorbed their tails, and developed the dark-brown or greenish colouration seen in adult frogs.

Like our other endemic frog species, Hochstetter's frogs are extremely long-lived, reported to reach ages in excess of 30 years (van Winkel et al., 2018).

Prior to the colonisation of Aotearoa by humans, Hochstetter’s frogs had a much greater distribution, occurring from Punakaiki on the South Island's west coast through to their current northern distribution in Waipu, Northland (Worthy, 1987). Today, they are restricted to the North Island, occurring in discrete populations scattered from the East Cape, across to the King Country, and up to Waipu. An additional population occurs on Aotea/Great Barrier Island within the Hauraki Gulf.

The Hochstetter’s frog is a nocturnal species, which can occasionally be found sitting in shaded areas during daylight hours. Unlike our other extant Leiopelma, Hochstetter's frogs are a semi-aquatic species, typically occurring within the vicinity of small forested streams, with plentiful rocky/woody debris. They are particularly averse to high sediment loads/silt, and as such are often absent from streams with significant disturbance (e.g., pig wallowing, habitat modification, forestry) (Whitaker, 1985; McLennon, 1985; Easton, 2015; Nájera-Hillman, 2009).

Unlike our other Leiopelma species, the young of Hochstetter's frogs are highly reliant on water bodies. This is due to them emerging from the egg at a less-developed stage than the terrestrial species (larvae/tadpole vs. froglet). These larvae exhibit high site fidelity (remaining in one place) until metamorphosis, and possess an aversion to light sources, preferring to bury themselves in debris at the bottom of ponds (Beauchamp et al.). These behaviours are likely related to predator avoidance.

Although they occupy a relatively narrow niche, Hochstetter's frogs can be found in a variety of habitats including; pine forests, mature podocarp/broadleaf forests, regenerating scrubland, seepages in banks, as well as in ditches adjacent to forested areas. Within these habitats, they sit within the mid-trophic level (middle of the food chain), preying on various invertebrates, and being prey for terrestrial predators, and large freshwater fish (e.g., banded  kōkopu and tuna (shortfin, and longfin eels)) (Nájera-Hillman, 2009).

Largely unknown, however, they appear to be primarily solitary. As with other Leiopelma species they can reach high densities in suitable habitats (Bell, 1994), but are rarely found occupying the same refugia outside of the breeding season. Unlike the exotic frogs that have been introduced to Aotearoa, Leiopelma frogs do not vocalise during the mating season to attract mates, instead, vocalisations are only known to (rarely) occur (squeak or chirp) when they are disturbed.

Some studies have shown that Aotearoa's native frogs utilise chemical signals to remain near their home range, preferring their own biochemistry or familiar biochemistries over those of unrelated populations.

As with all of our endemic frog species, the Hochstetter’s frog is oviparous (egg-laying), laying either one or two strings of 10-13 small whitish-yellow eggs (4-6mm in diameter), from late September through to May. Prior to laying, male frogs will latch onto females in a process called amplexus, fertilising eggs as the female lays them in a suitable nesting site. There is very limited information on nest preference, but Hochstetter’s frogs appear to select moist sites, sheltered by various debris. In particular, they seem to favour seepages with substantial rock cover, small pools with extensive leaf litter, large invertebrate burrows (New Zealand bush giant dragonfly nymphs(Uropetala carovei)), and underwater cavities (Beauchamp et al., 2010; Bell, 1978).

As is typical of Leiopelma, Hochstetter’s frogs do not have a free-living (feeding) tadpole phase, however, they do have a nidicolous (remain at the nest site for an extended duration) larval phase, unlike our other endemic frogs. These swimming larvae emerge from the gelatinous eggs (which at this stage are about 20-27mm in diameter) around 40 days after being deposited. If they are not already in a suitable water body at this stage, they quickly make their way to the closest one. These larvae emerge with non-digited hindlimbs, but over the next ~52 days slowly form fully digited hind and forelimbs, and reabsorb their tail. By the time metamorphosis is complete the froglets are around 6-11mm SVL. Hochstetter’s frogs reach maturity/breeding age at around 3 years (Beauchamp et al., 2010; Bell, 1978).

Hochstetter’s frogs are carnivorous, nocturnal predators feeding on a wide range of invertebrate prey. An analysis of the gut contents of wild animals found that their prey consisted of springtails, mites, ants, parasitic wasps, amphipods, and isopods (Shaw et al., 2012), although it is likely that they opportunistically prey on other invertebrates within, and near water bodies.

As is the case with all of Aotearoa's herpetofauna, the diseases and parasites of our endemic Leiopelma frogs are poorly understood, and incomplete. However, their main disease risk comes in the form of the Amphibian chytrid fungus (Batrachochytrium dendrobatidis (Bd)), a fungal infection that causes a disease called chytridiomycosis. This disease has decimated or caused the extinction of many frog species worldwide. Luckily, our endemic frogs seem to be somewhat immune to it, having peptides within the skin that inhibit the fungus (Shaw et al., 2014; Melzer & Bishop, 2010).

Whilst, Bd is a major concern for wild populations, some diseases are more prevalent in captive situations. For example, in captivity, Leiopelma frogs are known to develop metabolic bone disease (MBD) and osteofluorosis (accumulation of fluoride in bones) due to improper husbandry (lack of UVB light, and excess fluoride in water bodies) (Shaw, 2012; Shaw et al., 2012).

Listed in the most recent threat classification as 'At Risk - Declining' due to the multitude of threats that they face on the mainland and on Aotea/Great Barrier Island.

In general, amphibians are highly sensitive to environmental change, and Aotearoa's frogs are no different. Hochstetter's frogs are particularly sensitive to their freshwater environments, with any change in chemistry or environmental makeup possibly resulting in major population crashes. Factors such as habitat modification/loss (via logging, mining, or infrastructure development), the release of toxins into waterways (via mining, chemical spills, or wastewater), and pig damage (disturbance of stream edges) are all serious threats to several Hochstetter's frog populations. The disease chytridiomycosis is also a serious threat to our endemic frogs, however, they seem to have some resistance to it.

Additionally, as with the majority of our herpetofauna, they have been negatively impacted by the introduction of mammalian predators, with many populations becoming locally extinct, or highly suppressed in certain regions (Worthy, 1987; Baber et al., 2006; Longson et al., 2017). Introduced frogs have also been implicated as a threat.

The specific name 'hochstetteri' references Ferdinand von Hochstetter (1829-1884), a german-austrian geologist who was responsible for bringing the first specimens to Europe (van Winkel et al., 2018). He was also instrumental in understanding the geological background of Aotearoa's landscapes - mapping Auckland's volcanic fields, as well as the pink and white terraces in the Rotorua District.

The Hochstetter's frog is the sister species to the extinct Markham's frog (Leiopelma markhami), and aurora frog (Leiopelma auroraensis), with the extant Archey's and Hamilton's frogs being more distant relatives (Worthy, 1987).

As is the case with all of our Leiopelma, Hochstetter's frogs exhibited significant morphological structuring across their historical range, with specimens from the southern extent of their distribution (Nelson) being much larger than northern populations (Worthy, 1987).

During a survey of the northern block of Aotea/Great Barrier Island for Hochstetter's frogs, Tony Whitaker and Graham Hardy came across a pair of frogs that were distinctly different from Hochstetter's frogs in terms of their behaviour. These frogs were found lying in a small pool of a fast-flowing forested stream during the day, and when approached they quickly swam away with a strong double-leg action (Whitaker & Hardy, 1985). Due to this strange behaviour and the habitat that they occupied, it was surmised that this was either an unusual behaviour, or that these frogs represented a cryptic, and as yet undescribed species. These frogs were later referred to as the 'northern Great Barrier swimming frogs' in the literature, but sadly, no new specimens have been found.

Bowsher, J. H. (2000). Intraspecific genetic variation in New Zealand's endemic frog, Leiopelma hochstetteri: a thesis submitted in fulfilment of the requirements for the Degree of Master of Science in the University of Canterbury.

Easton, L. (2015). Determining the feasibility of a translocation by investigating the ecology and physiology of the threatened Hochstetter's frog (Leiopelma hochstetteri): A thesis submitted for the degree of Masters of Science at the University of Otago, Dunedin, New Zealand.

Eggers, K. E. (1998). Morphology, ecology and development of leiopelmatid frogs (Leiopelma spp.), in Whareorino Forest, New Zealand: a thesis presented in partial fulfilment of the requirements for the degree of Masters of Science in Ecology at Massey University (Doctoral dissertation, Massey University).

McLennan, J. A. (1985). Some observations on Hochstetter's frog in the catchment of the Motu River, East Cape. New Zealand Journal of Ecology, 1-4.

Najera-Hillman, E. (2009). Leiopelma hochstetteri Fitzinger 1861 (Anura: Leiopelmatidae) habitat ecology in the Waitakere Ranges, New Zealand: A thesis submitted to the Faculty of Health and Environmental Sciences, Auckland University of Technology in fulfilment of the requirements for the degree of Doctor of Philosophy.

Nájera-Hillman, E., King, P., Baird, A. C., & Breen, B. B. (2009). Effect of pest–management operations on the abundance and size–frequency distribution of the New Zealand endemic frog Leiopelma hochstetteri. New Zealand Journal of Zoology, 36(4), 389-400.

Turbott, E. G. (1949). Discovery of the breeding habits of Leiopelma hochstetteri Fitzinger. Records of the Auckland Institute and Museum, 373-376. 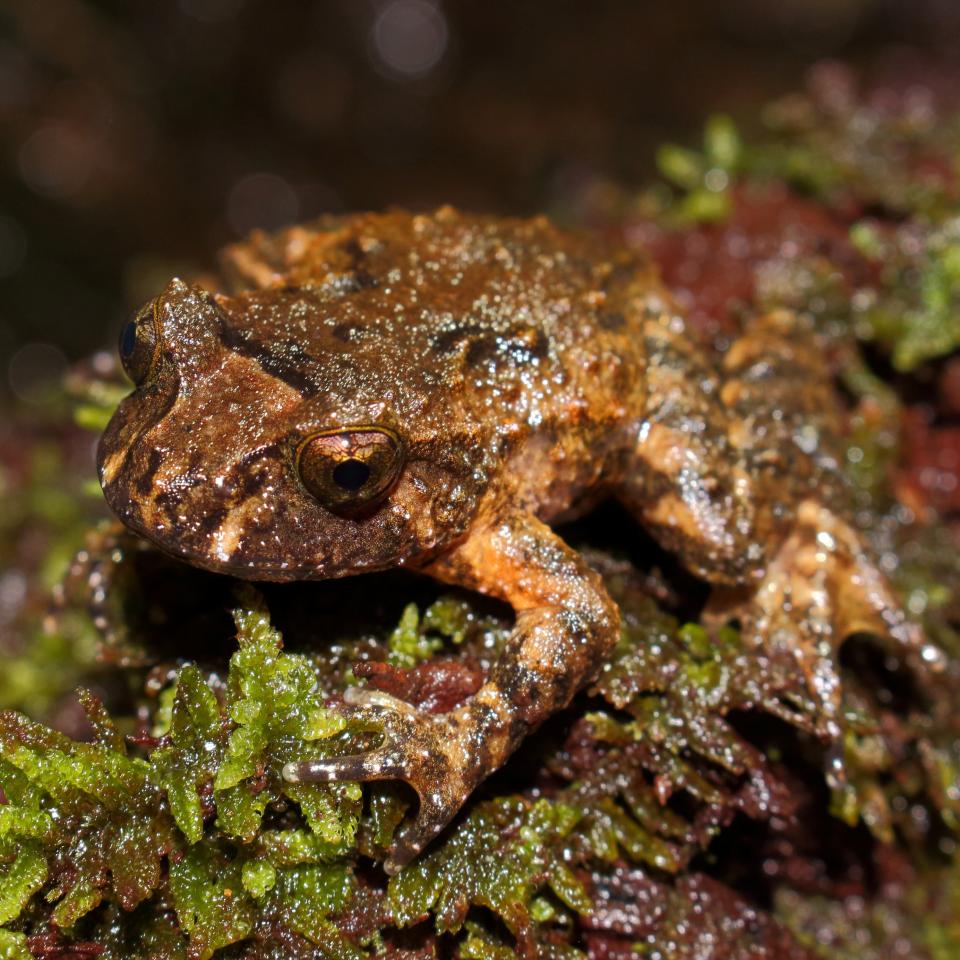 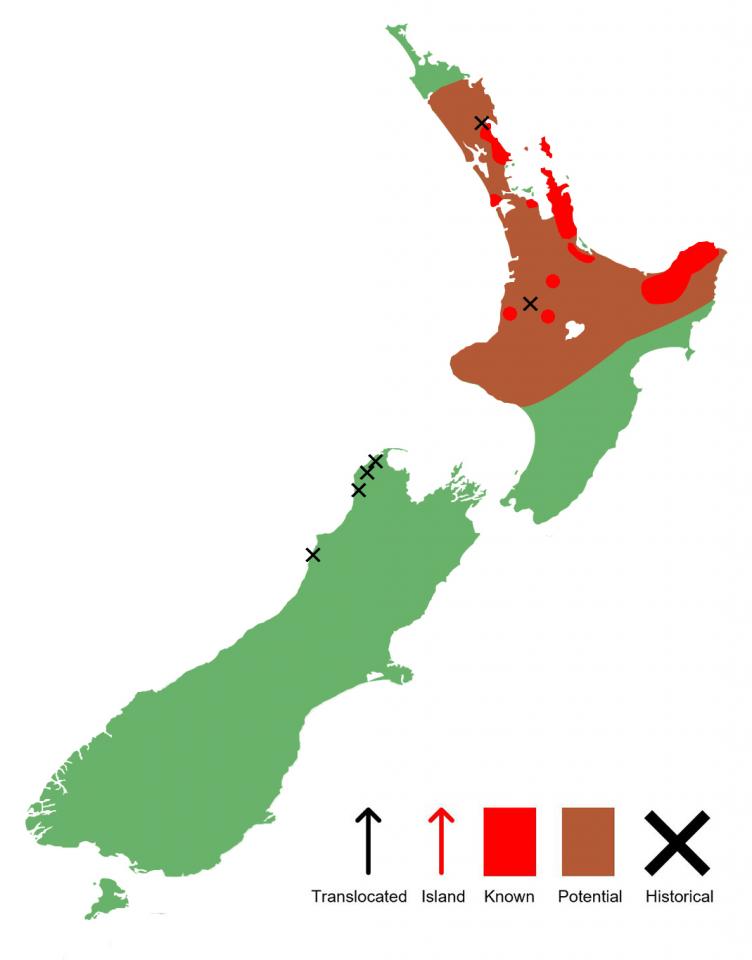 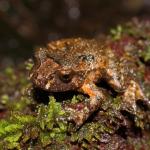 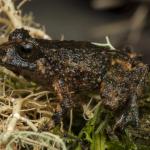 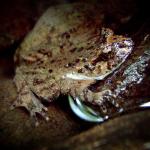 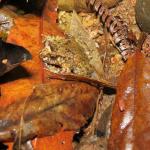 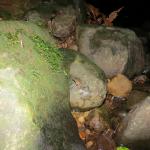 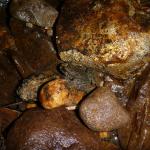 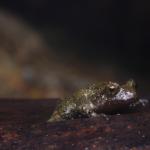 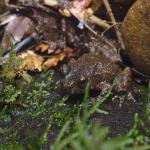 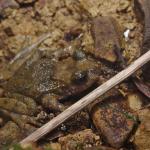 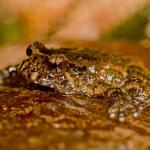 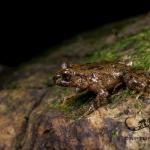 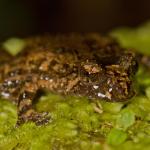 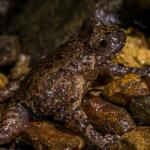 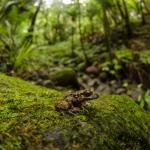 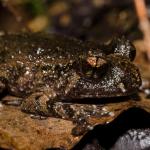 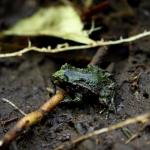 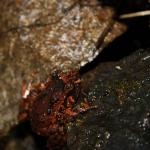 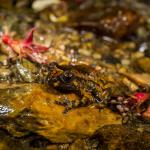 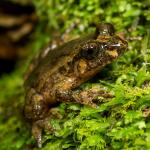 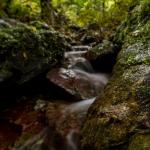 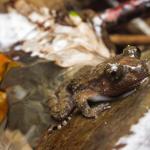 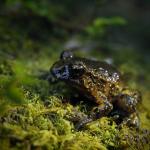 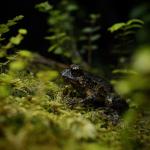 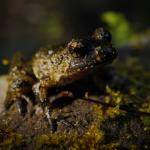 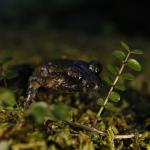 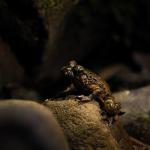 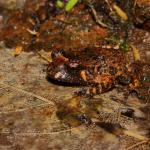