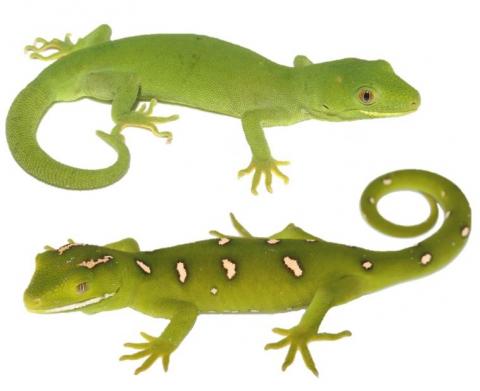 Length: SVL up to 75mm, with the tail being longer than the body length

Formerly known as the Auckland green gecko, elegant geckos are a striking and variable species occurring from southern Northland to the central North Island.

Elegant geckos are bright green to dark green, and may be unpatterned, or marked by two rows of pink, yellow, or cream to white blotches/stripes (often finely edged with black) down each side of the dorsal surface. Some individuals may be partially striped, or have only one or two spots near the tail or head, rather than a full set of spots on either side of the body. In general females tend to have a pale green belly, with males having a pale blue belly (note that this is not a definitive way to sex individuals). Juveniles are pale green with the dorsal surfaces being darker; darker dorsal colour is lost between the first and second moult. Occasionally, xanthochromic individuals can be found which appear bright canary yellow, this is due to a genetic condition where individuals lack blue pigment in the chromophores. Xanthochromism appears to be a polygenetic trait in N. elegans, as pairs of xanthochromic individuals may have normal coloured (green) offspring. Lining of the mouth is rich blue with a black to bluish/black tongue. Eyes are light orange/brown. Soles of feet are light grey green. Canthal scales are slightly domed.

Click here for information on how elegant gecko differ in appearance from other species in the Naultinus group.

Elegant gecko have been known to live for over 25 years in captivity (D. Keall, personal communication, September 22, 2016).

Elegant gecko are diurnal (active during the day) and strongly arboreal (tree dwelling) although they will move through grasslands and ground cover between habitats. They often inhabit pioneer scrubland and regenerating forest types, in particular occupying the foliage of trees and shrubs, including manuka and kanuka trees.

All green geckos have prehensile tails which act as a climbing aid.

All green gecko species are solitary and can often be aggressively territorial. In captive group situations green geckos can often display aggressive behaviour, particularly biting, towards conspecifics (particularly aggression between males as a result of competition for mates). Green geckos will also display aggressive behaviour if threatened; this consists of mouth gaping, biting, lunging, and vocalisation (a barking sound).

Elegant gecko are viviparous, giving birth to one or two live young. Sexual maturity is reached between one and two years. Some keepers have noticed that Naultinus sp. in captivity appear to express ‘choice’ as to when to mate and reproduce according to conditions (D. Keall, personal communication, September 22, 2016).

Elegant gecko give birth in early spring (though births have been recorded much later in the year for animals in captivity). Elegant gecko have been reported to have an extremely long gestation of up to a year.

The diet of elegant gecko is omnivorous, and consists primarily of invertebrates such as flies, beetles, spiders and moths. Green geckos are generally ‘sit and wait’ predators for invertebrates, however will forage for soft berries and nectar from native flowers within their home range.

The ectoparasite Geckobia naultina have been found on elegant gecko. Oocysts of Eimeria steidae have also been recorded, along with two other protozoans (Ashby 1971).

DOC classify the species as 'at risk' with a predicted decline of 10-70%.

Genetic studies looking at the Naultinus genus resulted in a phylogenetic and taxonomic review in 2011, with the elegant gecko (N. elegans) and barking gecko (N. punctatus) being elevated from sub species to full species status. 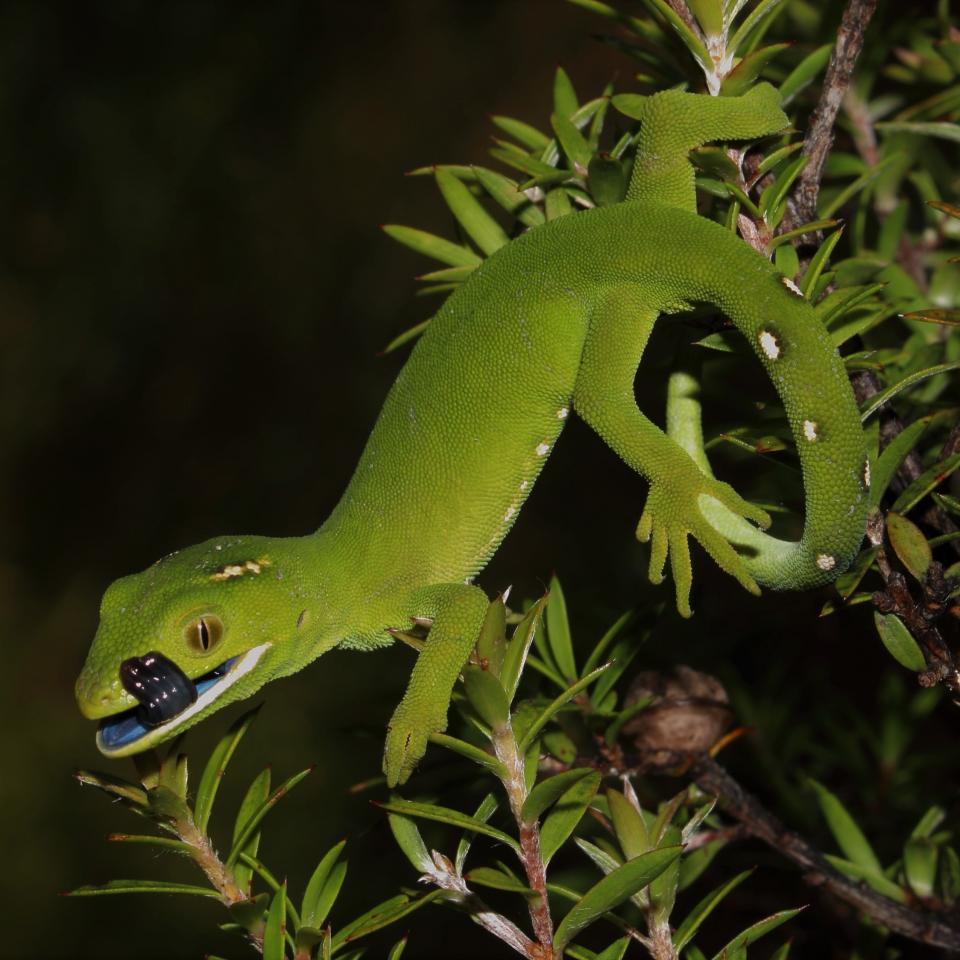 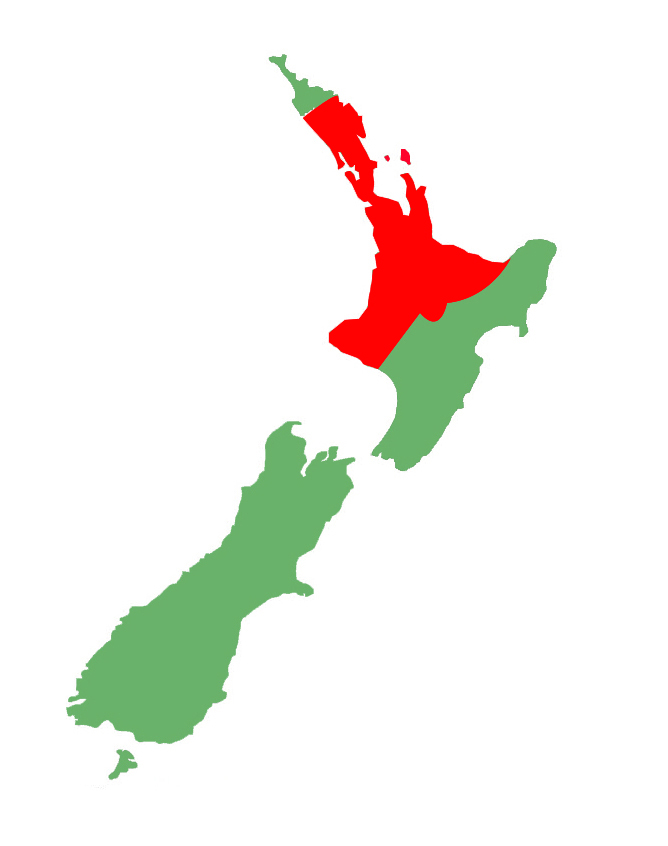 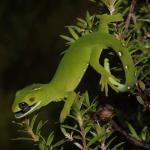 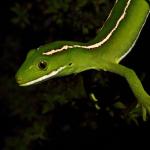 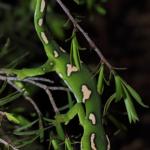 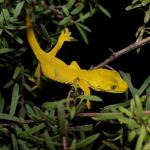 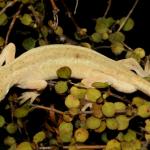 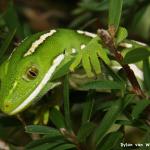 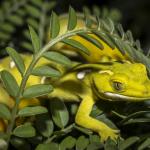 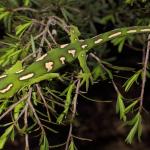 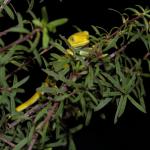 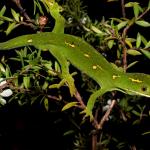 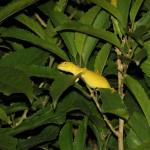 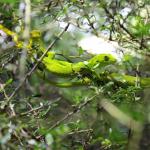 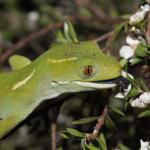 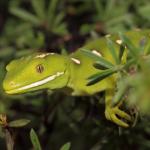 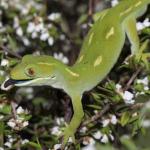 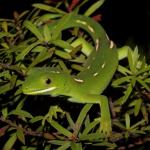 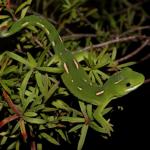 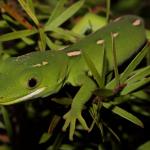 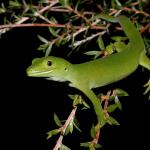 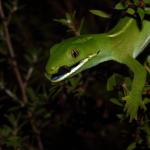 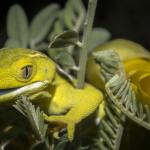 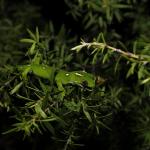 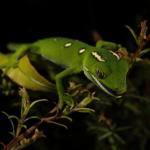 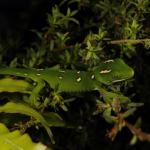 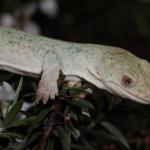 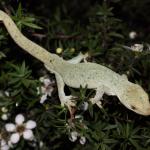 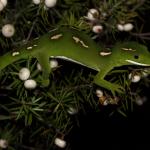