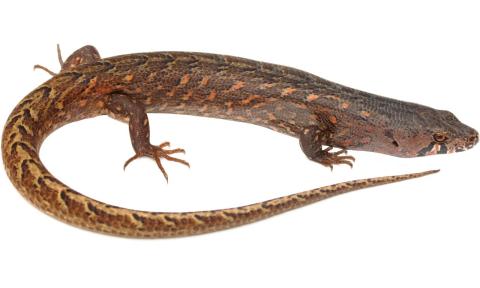 Length: SVL up to 146mm, with the tail being longer than the body length(1.5x)

A large, distinctive, beautifully-patterned and iconic skink from the outer Hauraki Gulf Islands, Chevron skinks are New Zealand's longest lizard reaching up to 35cm in total length (mainly by virtue of their tail which can be almost 1.5 x their SVL / body length).

Their dorsal (upper) surface and flanks may be grey through to a light reddish brown, with darker distinctive chevron markings present along tail and back (apexes point towards head). Flanks have small pale blotches. Ventral (lower) surface pale yellow to pinkish-yellow with scattered spots, spots are most concentrated on throat which may be flushed with bright pink or red-orange colouration. Chevron skinks have a distinctive pattern of denticulate black and white stripes running along the lips, including a pale black edged ‘teardrop’ shape below they eye. The pattern of blotches on the face and throat are unique and can be used to distinguish individuals within populations.

Little is known about the longevity of chevron skinks. However, a wild born skink which was caught as an adult, has been held in captivity since 1997 (Dave Laux, pers. comm, 07 June 2022). Thus, it is estimated that longevity of the chevron skink is at least 30 years, but probably longer. Another wild-born male, caught as an adult, was held in captivity for approximately 15 years between 1985-2000 (K. Neilson, personal communication).

Chevron skinks are believed to be 'pseudo-endemic' to these two islands, as historical accounts and a single preserved specimen held at Auckland Museum indicate they previously occurred on the mainland north of Auckland.

Chevron skinks are diurnal but highly cryptic. They are rarely observed foraging in the open, but will occasionally be seen basking in patches of sunlight near a retreat.

They are prone to evaporative water loss, so prefer thermally stable refuge sites. They are often associated with stream margins in native forest where they will live under rocks and logs, or in debris dams. Chevron skinks may also live under natural or anthropogenic debris in more open sites.

Chevron skinks have strongly prehensile tails and are excellent climbers. They are known to climb trees during heavy rain / flooding, and often hide in tree ferns where their chevron pattern provides excellent camouflage amongst the dead fronds.

Chevron skinks are also known to dive into streams and hide under water to evade predators, they are able to hold their breath for a considerable time until the perceived danger has passed.

Largely unknown but thought to be solitary. They will grunt or squeak if disturbed.

Female chevron skinks give birth to litters of up to 8 live young in mid to late summer. It is not known if chevron skink breed annually or biennially.

Chevron skinks may take around seven years to reach maturity.

The diet of chevron skinks includes a wide range of invertebrates (including spiders and snails).

Listed as ‘nationally vulnerable’ under DOC classification list. A research project was carried out between 1997 and 2002 investigating habitat use and detection methods. DOC have a recovery programme in place for the Oligosoma skink group.

Te Hauturu-o-Toi / little barrier island was cleared of all mammalian pests in 2004. Increased sightings of chevron skinks in recent years suggest the species is recovering on the island. Chevron skinks are also present in one predator-fenced sanctuary on Aotea / Great Barrier Island.

Also known as ‘Niho Taniwha’, which translates to ‘teeth of the taniwha’ in Te Reo Māori (a reference to the distinctive chevron markings on the back).

Chevron skinks are unusually vocal for skinks, and will often grunt or squeak when disturbed.

The species were first described in 1906, then due to mislabelling of specimens they were 'lost’ for 70 years before being rediscovered in the late 1970's on Great Barrier Island.

They were subsequently discovered on Little Barrier Island in 1991.

The narrow-bodied skink (Oligosoma gracilicorpus) was previously regarded as a distinct species, and known from a single (very bleached) specimen collected in the Hokianga area during the 1800's. More recent analysis of the specimen's morphology concluded this individual was a male chevron skink, and synonymised the two species. This mainland specimen, along with historical accounts of large lizards matching chevron skinks from north of Auckland, suggest the species was formerly more widespread. 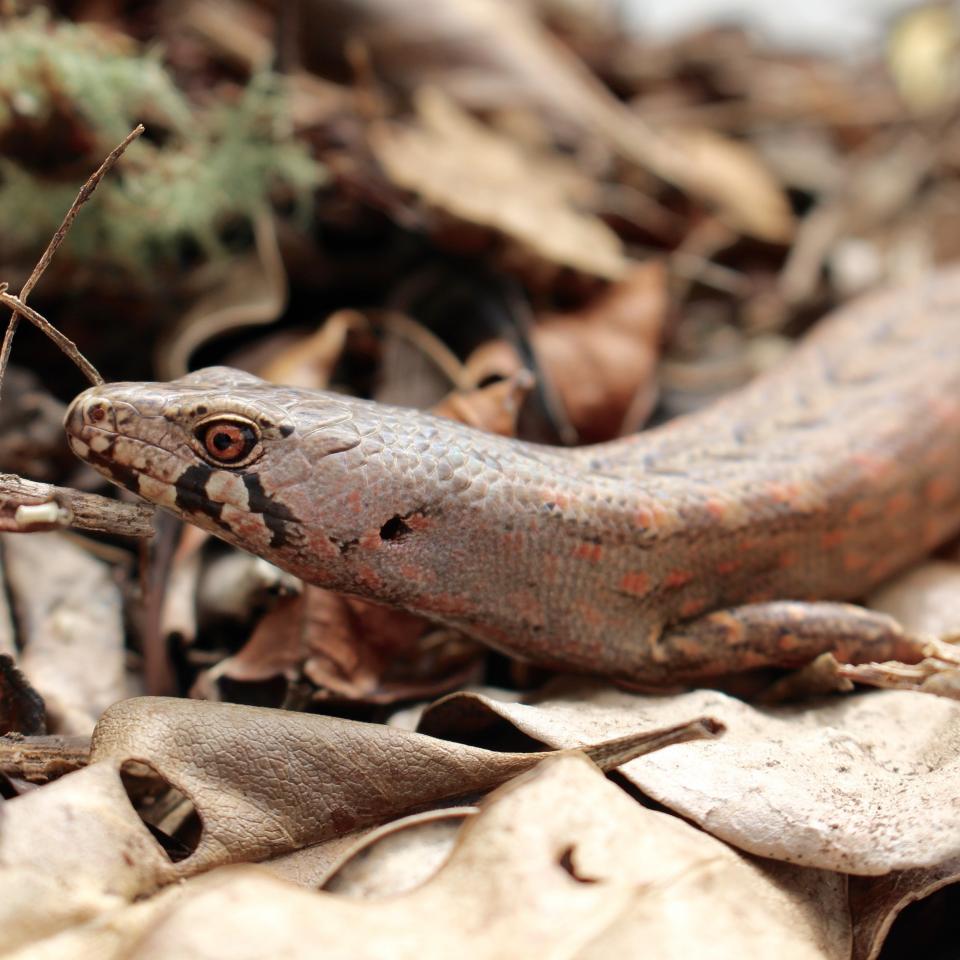 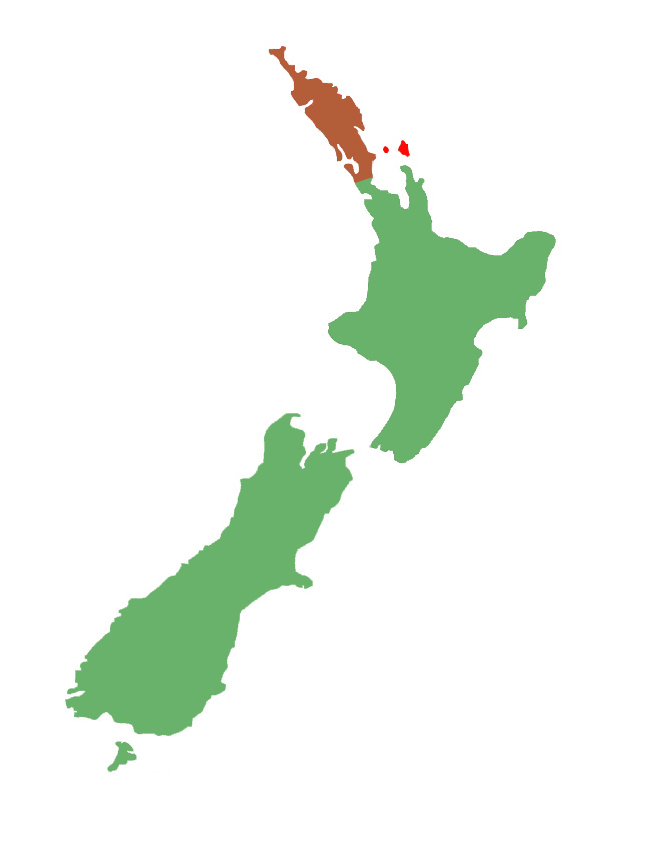 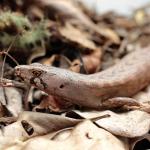 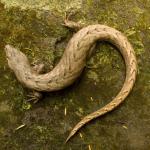 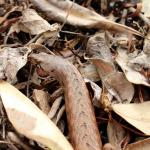 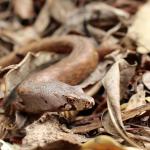 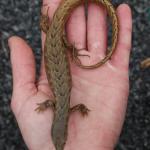 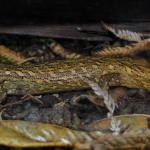 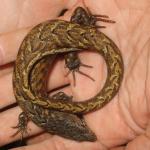 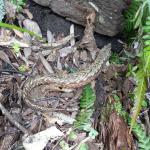