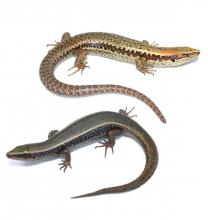 'Speckled skinks' and 'spotted skinks' both comprise cryptic species complexes where the various related species are similar (or almost identical) in appearance but meet the biological and genetic thresholds to be deemed separate species.

One species from each complex are known to occur in captivity: Newman's speckled skink (Oligosoma newmani), and the northern spotted skink (Oligosoma kokowai). Both species have proven relatively challenging to maintain / breed in captivity, with spotted skinks in proving particularly aggressive towards conspecifics (members of the same species). It is likely that species within these compexes are closely related and may hybridise in captivity, for this reason they should be maintained in separate enclosures to avoid the risk.

Speckled skinks and spotted skinks may be held on the second level authorisation (Insurance population species).