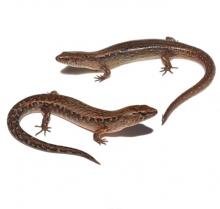 All species have proven relatively challenging to maintain in captivity and are less available than the small diurnal skinks (which can be found in a separate care guide). The key with these species is providing them with a complex habitat replicating the natural conditions they experience in the wild, and particularly the provision of humid areas along with thermally stable refuge sites.

Copper skinks and Ornate skinks can be held on second level permits (Insurance population species). The captive population of Whitaker's skinks are the remnants of a population at Pukerua Bay which has gone locally extinct. These individuals are all involved in a DOC captive breeding programme, and may only be held on the highest level permit (conservation / breeding programme species) by invitation from the captive management coordinator.