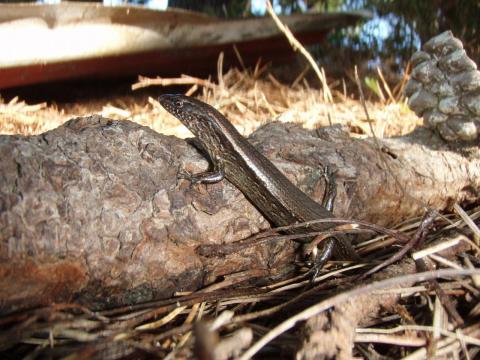 Copper skink are New Zealand’s smallest native skink, reaching SVL (snout-vent-lengths) of up to 67mm. Dorsal (upper) surface brown, may be uniform or have scattered light and/or dark flecks. Copper skink often have a bright copper coloured stripe at the edges (usually above the forelimbs), some individuals have a black highlight at the lower margin of the stripe. The ventral (lower) surface is a uniform cream or yellowish green. The throat is paler than the belly and has heavy black spotting; jawline commonly flecked with black and white markings. The tail and hind limbs may have red colouration, particularly on the ventral side. The red colouration in the tail and limbs is accentuated during breeding season. An alternating black and white denticular pattern surrounds the mouth.

Copper skink are the most commonly sighted native skink and are widespread throughout the North Island.

Copper skink inhabit areas with good ground cover in open and shaded areas of forests. In coastal areas copper skink can be found close to the high tide line. Copper skink are also found in urban areas, most commonly found in compost heaps and rock gardens.

A secretive species which rarely emerge from cover. Copper skink are active in the pre dawn period and throughout the day.

Small invertebrates; insects such as beetles, spiders, and mites.

Copper skink have been found to have Salmonella, however, endoparasites are not always pathogenic and it may be possible that only serious infestations cause disease.

DOC classify copper skink as ‘not threatened’, the species appear to have been able to adapt relatively well to habitat change and are able to survive in urban environments.  Copper skink inhabit a similar niche to the introduced rainbow skink, therefore, there is the possibility of significant competition between the two species.

DOC have a recovery programme in place for the Oligosoma skink group.