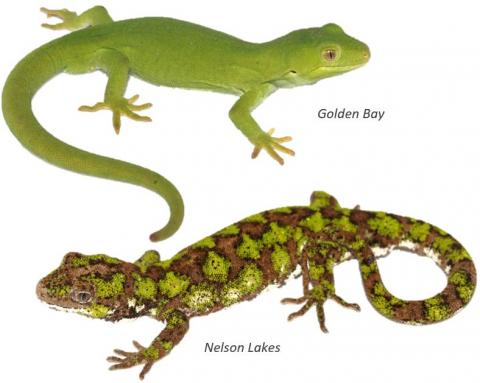 Length: SVL up to 81mm, with the tail being equal to or slightly longer than the body length

A beautiful and highly variable species of green gecko found inhabiting a variety of habitats within the north-western South Island. Although considered to be the same species across their entire range, they are generally split into three different forms, based on both locality and general appearance.

Regarded as the most striking of the three forms, they often exhibit sexual dichromatism (difference in colourations between genders). Both sexes are characterised by complex brown, white, and green colouration, but the proportion of each varies substantially between them. For the most part, males are characterised by their chocolate brown background colouration, which is broken up by green star-like markings, that are edged by darker pigments (blacks and dark greens). Whilst females have a similar pattern, although the browns are often greyer, and they have a higher proportion of green (especially around the head). The lateral surfaces (sides) are for the most part similar to that of the dorsal, but for the addition of white markings (which may fill the interior of the green markings). The ventral (stomach) colour is often a rich to light brown streaked with white spots and streaks. Green pigments may also be visible, particularly around the interface with the lateral surface.
Young are born green with white markings, but slowly change to resemble their parents over the course of 1-2 years.
As with the other forms they are characterised by a lilac/pink mouth with a red tongue.
Xanthochromic (yellow) individuals are known to occur in this form.

In general, this form is somewhat intermediate among the others. Typically, much more patterned than the Golden Bay animals, and less so than the Nelson Lakes form. Some individuals may be plain green; however, males are often characterised by their blue-green background colouration, which is often broken up by light green or white markings, and edged by darker green pigments. The sides of the animals are much the same as the upper surfaces, generally matching the background colouration of the dorsal surfaces, although may be underlined by a thin white stripe. The ventral colour is often a rich to light brown streaked with white spots and streaks. Green pigments may also be visible, particularly around the interface with the lateral surface.
As with the other forms they are characterised by a lilac/pink mouth with a red tongue.

This form is characterised by their plain green upper surfaces, which may rarely be broken up by faint white or yellowish markings. The sides of the animals are much the same as the upper surfaces, although may be underlined by a thin white stripe, and in some males may be flushed with pale blue colouration, especially around the throat, vent, and lower flanks. The ventral colour is pale green, sometimes with a yellow tinge, although some males exhibit a blue-tinged stomach.
As with the other forms they are characterised by a lilac/pink mouth with a red tongue.

In general, starred geckos can be differentiated from the West Coast green gecko (Naultinus tuberculatus) by a red (versus dark-blue/black) tongue, from rough geckos (Naultinus rudis) by their relatively smooth (versus heavily spiked) scales, and red (versus grey) tongue, and from the Marlborough green gecko (Naultinus manukanus) by the lack of enlarged scales on the head and body. Individuals from the Maitai area near Nelson show evidence of past hybridisation with Marlborough green geckos (Naultinus manukanus), and so may share a mix of characteristics, but are often much more patterned than the former.

Click here for information on how starred gecko differ in appearance from other species in the Naultinus group.

Starred geckos have been reported to reach the age of 47 years in captivity (H. Pukloswki pers. comm. in Hare et al. (2007).

Starred geckos are restricted to the Northwestern South Island, from Bryant Range east of Nelson, south to the Nelson Lakes Region, and possibly bounded by the Mokihinui river on the West Coast. May have, or may still occur on some of the islands in the region (e.g., Motuareronui/Adele Island).

The starred gecko appears to be cathemeral (active both day and night) in nature, although predominantly considered diurnal (day-active), due to its strongly heliothermic nature (being an avid sun basker). As with all members of the Naultinus genus they are primarily arboreal (tree-dwelling), although can at times be found quite low to the ground in prostrate (ground hugging) vegetation. Although seldom seen on the ground, males can be found travelling between trees in search of mates during the breeding season. As with all green geckos, they possess a strongly prehensile tail which acts as a third-limb/climbing aid when moving through shrubs and trees. They are known to mouth gape and produce a barking sound as a defensive behaviour against potential predators.

Being an arboreal species, starred geckos are closely associated with forested habitats, and thus inhabit a wide variety of forest types in the Tasman/West Coast region, including swamps, scrubland, and mature forest. They appear to favour scrubby/regenerating habitats, but this may be a result of the relative ease of access to, and amount of search effort that these sites garner.

The starred gecko is solitary in nature, although can be found at fairly large densities in some habitats. Males show aggressive behaviour toward congeners, especially during the breeding season, and this is easily observable with many males showcasing scarring over their bodies. Mate guarding seems to occur in this species, with males often found in close proximity to females prior to birthing. Although independent at birth, neonates (babies) are often found together and close to the mother for the first few months of life.

Like all of Aotearoa's gecko species, the starred gecko is viviparous, giving birth to one or two live young annually, from around Late February through to April.
As is the case with many lizard species, mating in green geckos may seem rather violent with the male repeatedly biting the female around the neck and head area. Sexual maturity is reached between 1.5 to 2 years.

Starred geckos are omnivores. They are primarily insectivorous in nature, but are also known to feed on the nectar, and small fruits of several plant species, and the honeydew of scale insects when they are seasonally available. Being arboreal in nature, their invertebrate prey tends to be predominantly composed of flying insects (moths, flies, beetles), and small spiders.

The starred gecko, as with many of our other Naultinus species, is a host for at least one species of endoparasitic nematodes in the Skrjabinodon genus (Skrjabinodon poicilandri), as well as at least one strain of Salmonella. Similarly, it is unlikely to be a host for ectoparasitic mites in the wild. Captive collections have been known to host mites, but these have likely shifted onto the animals from different species e.g. Mokopirirakau, Dactylocnemis, and Hoplodactylus geckos.
Wild green geckos have been found with pseudobuphthalmos (build-up of liquid in the spectacle of the eye) and Disecdysis (shedding issues).

Listed in the most recent threat classification as 'Threatened - Nationally Vulnerable', due to a mix of land development/clearance of habitat, predation by mammalian predators, and competition/predation from Vespula wasps.

The specific name 'stellatus' references the star-like markings that can be found on the dorsal surfaces of this species - particularly the Nelson Lakes, and Sandy Bay individuals. 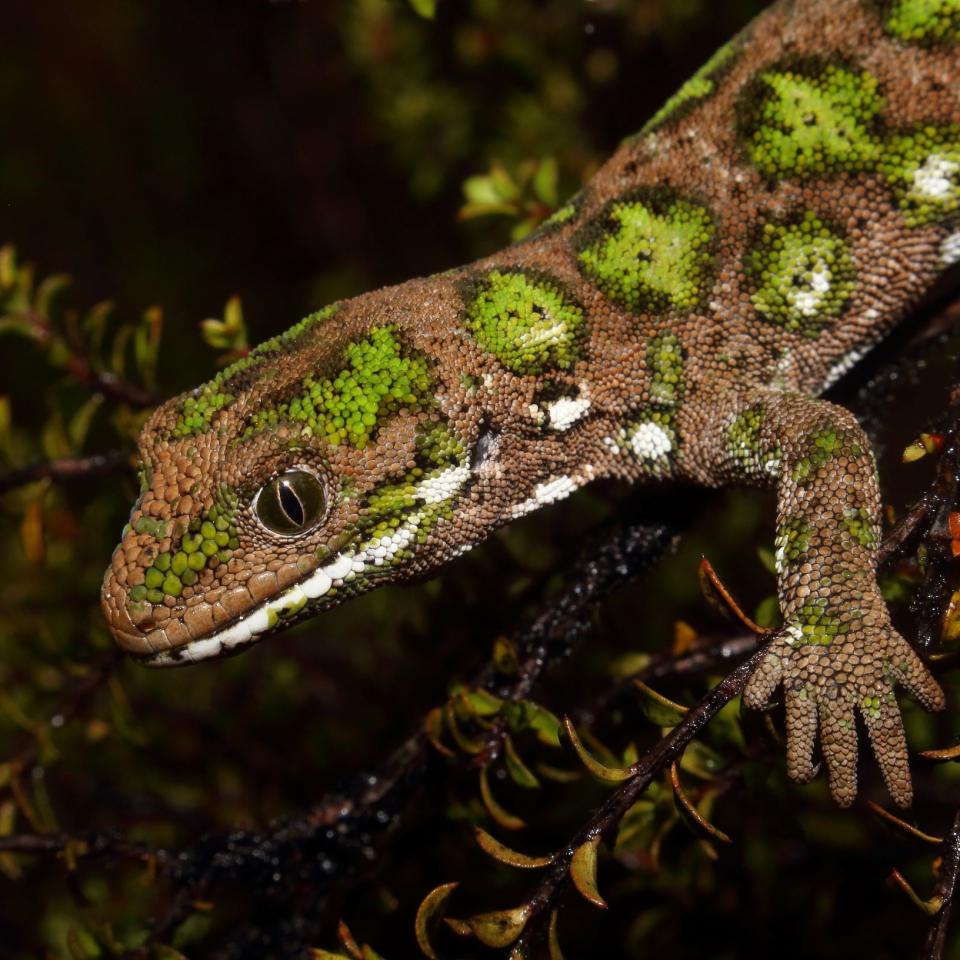 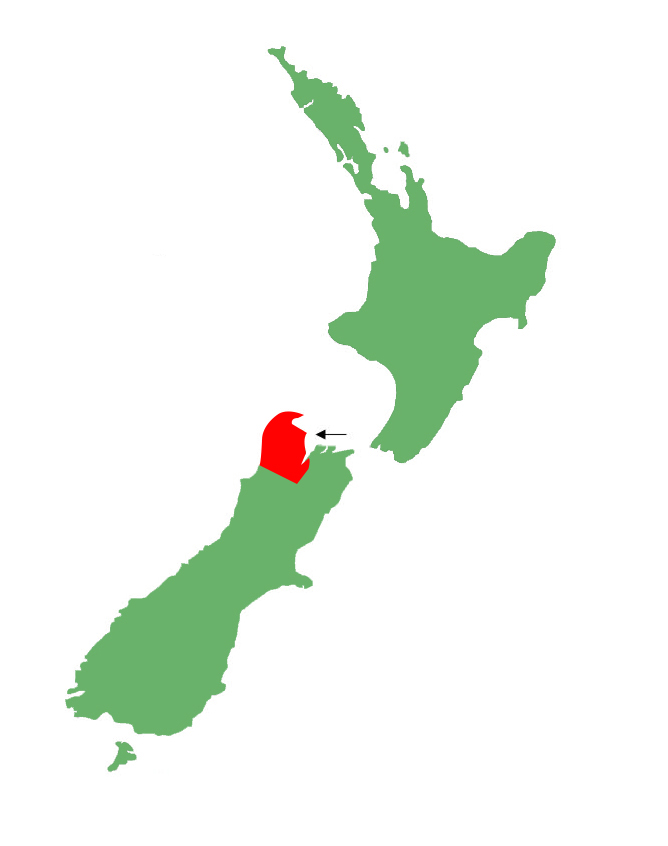 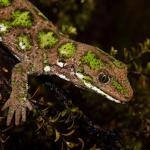 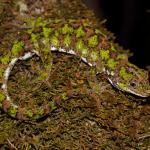 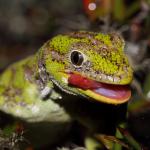 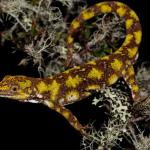 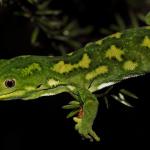 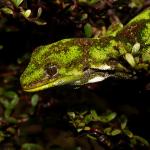 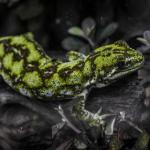 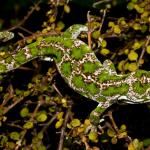 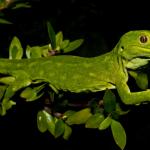 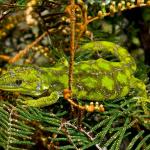 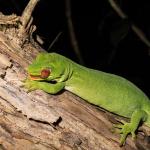 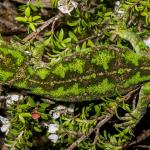 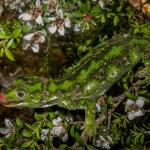 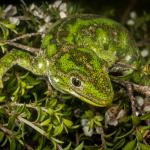 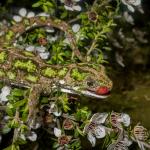 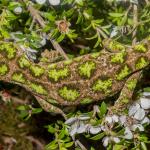 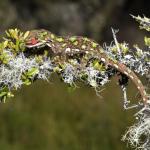 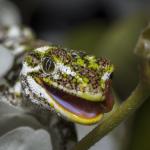 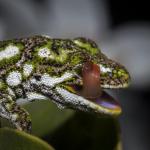 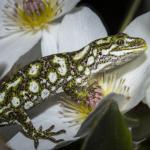 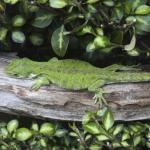 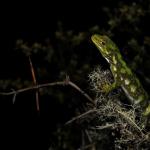 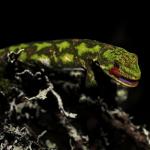 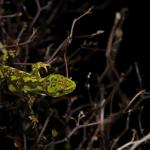 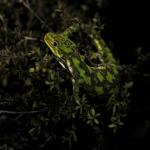