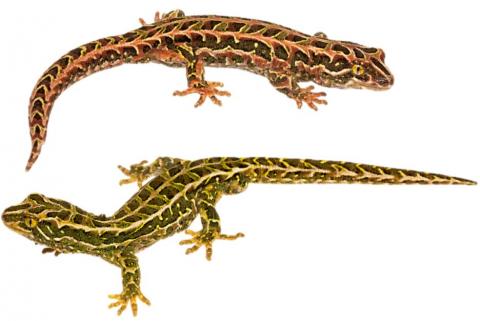 Length: SVL up to 71mm, with the tail being equal to or shorter than the body length

A small, and distinctive gecko which ekes out an existent in the alpine environments of southern Stewart Island. Their intricate patterning and extraordinary colouration have led to them being regarded as Aotearoa's most beautiful lizard species.

The harlequin gecko is characterised by its distinctive dorsal (upper) surfaces which are often a mix of various shades of black, brown, bright green, or olive green with highly distinctive herringbone patterns; which can be a mix of colours ranging from bright oranges, through to reds, yellows, bright greens, pinks, and whites.
The lateral surfaces (sides) are for the most part similar to those of the dorsal, although a white stripe typically runs from behind the eyes diagonally onto the neck.
The ventral (lower) surface is dirty white in colouration and often speckled with light browns or greens giving a mottled appearance.
The mouth of the harlequin gecko is distinctive with the floor of the mouth being pink or grey while the roof of the mouth is dark grey or blue with a grey/indigo tongue.
The eyes are a distinctive bright yellow, through to greenish-yellow.

Unlikely to be confused with other lizard genera on Stewart Island. However, could potentially co-occur with unknown populations of jewelled geckos (Naultinus gemmeus), or cloudy geckos (Mokopirirakau nebulosis).
Easily distinguished from the former by the presence of the bright herringbone patterns, and yellow eyes (The Stewart Island form of the jewelled gecko appears to lack patterning). Whilst it can be distinguished from the latter by the bright yellow eyes, and intricate patterning (alpine cloudy geckos may share bright orange/red patterns with the harlequin gecko, but lacks the complex patterning).

Largely unknown, however, many of Aotearoa's geckos have been known to live for 50+ years in the wild. Given that the harlequin gecko lives in a much cooler environment than those long-lived species, and thus has a lower metabolic rate than most, it is not unreasonable to suggest that this species may live upwards of 80 years in the wild.

The harlequin gecko is Aotearoa's southernmost gecko species, being restricted to the southern parts of Stewart Island.

The harlequin gecko is a terrestrial (ground-dwelling) species, that inhabits the complex ground covers and shrubs that occur throughout the southern half of Stewart Island. Although considered to be nocturnal, they are more likely to be cathemeral due to the climate in the region, being active during appropriate weather windows. They have been observed basking on warm sunny days.

Harlequin geckos inhabit windswept wetlands, shrubland, and rocky outcrops across a wide altitudinal range (although it is subalpine from sea level, throughout their range).

Largely unknown, but likely to be solitary in nature. Harlequin geckos make soft chirruping calls or loud squeals. On warm afternoons they can sometimes be heard making loud calls, with males making a harsh chittering sound. In suitable habitats, they may reach large densities.

Like all of Aotearoa's gecko species, the harlequin gecko is viviparous, giving birth to one or two live young. However, unlike many species from warmer climates, harlequin geckos have a long gestation period, being theorised to give birth every second or third year in late summer.

Harlequin geckos are omnivores. As with other gecko genera, they are thought to be primarily insectivorous in nature, but are also known to feed on the nectar, and small fruits of several plant species when they are seasonally available.

The harlequin gecko, as with many of our other gecko species, is most likely a host for at least one species of endoparasitic nematodes in the Skrjabinodon genus, as well as at least one strain of Salmonella.

The species is named after Rakiura (the Maori name for Stewart Island). 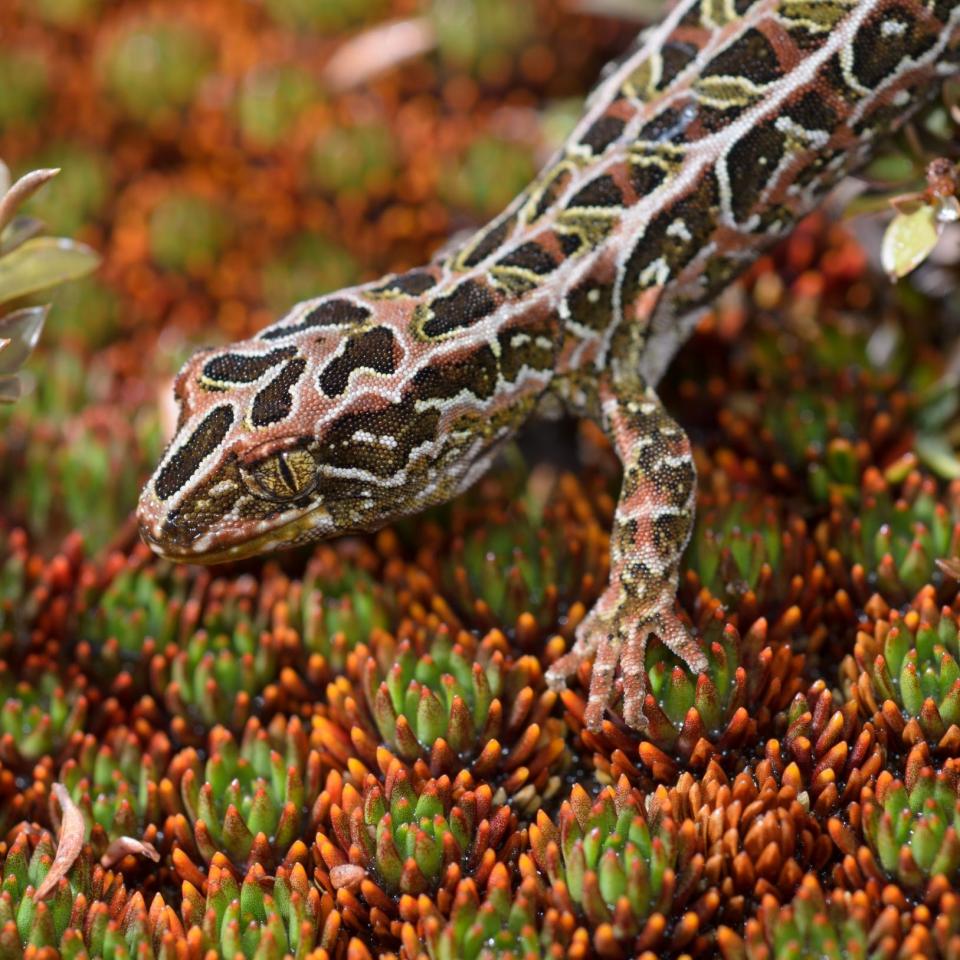 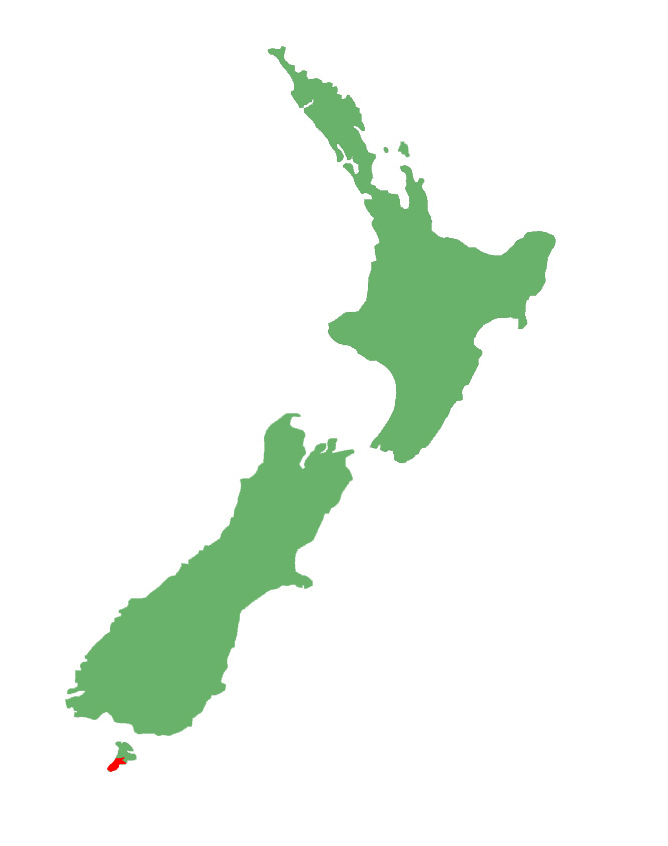 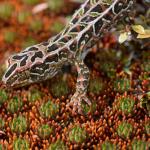 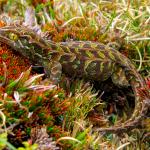 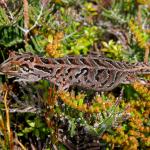 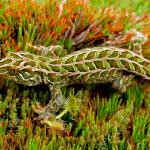 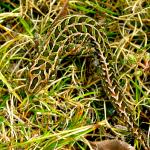 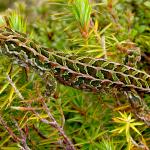 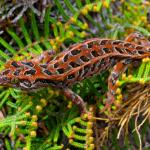 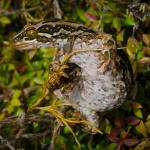 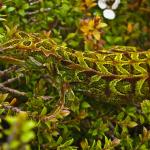 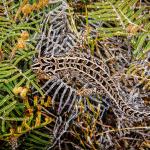 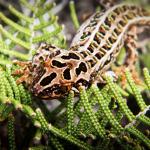 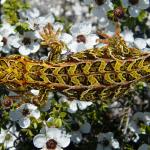 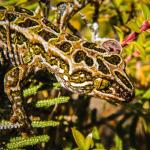 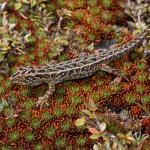 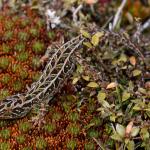 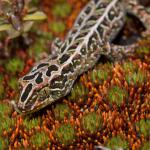 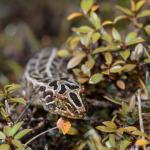 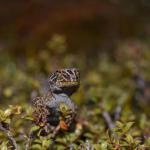 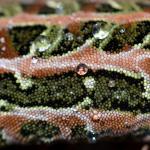