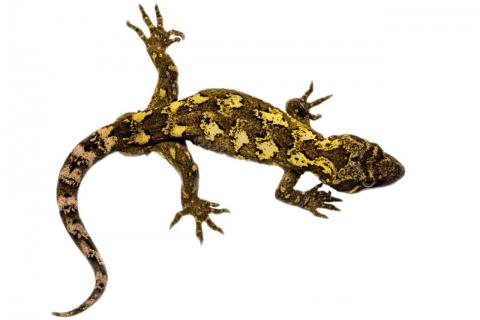 Length: SVL up to 90mm, with the tail being equal to the body length

An elusive species of Mokopirirakau from Stewart Island and its outlying islands, known for its eccentric cloudy appearance.

They are characterised by their dorsal surfaces which are typically brown, grey, olive-grey, dark green, or pink-brown with large W-shaped chevrons, markings or blotches. These are often discernible as diamonds on either side of the mid-dorsal region that appear to form pairs, and can be continuous, forming irregular longitudinal stripes. Markings are variable, but are typically pale grey or yellow and are often edged black. The dorsal surface sometimes bears dark speckles. A typical V-shaped marking is present on the head, as seen in some other Mokopirirakau species, as well as a pale stripe extending from the ear opening to the eye. The lateral (lower) surfaces are the same colour as the dorsal surface but typically lack the striking dorsal patterns. Instead, they are either uniform or bear irregular pale blotches. Speckles are sometimes present on the lateral surfaces too. The ventral surface is uniform grey or cream, with dark speckles or longitudinal stripes. Eye colour olive-grey. Mouth interior is yellow to bright orange, whilst the tongue is often pinkish with a diffuse-grey tip (similar to the closely related Tākitimu gecko, Mokopirirakau cryptozoicus). The soles of the feet are often grey or cream (van Winkel et al. 2018; Jewell 2008; Thomas 1981).

Known from mainland Stewart Island (few records exist here and it is unknown if the species is still present), and outlying islands such as Codfish Island/Whenua Hou, and the Tītī/Muttonbird Islands. Cloudy gecko densities on predator-free offshore islands appear to be much higher, perhaps as a consequence of limited or no major predators, or due to habitat features (i.e. Mokopirirakau can be extremely difficult to find in highly complex mature podocarp/hardwood forest)(van Winkel et al. 2018; Jewell 2008).

Cloudy geckos are primarily nocturnal or cathemeral, arboreal and terrestrial. They may bask in the open or in partial concealment. This species inhabits scrub, shrubland, and lowland forest. It may also inhabit rocky areas, such as bluffs, rock tors, and loose rocks scattered across the ground (van Winkel et al. 2018; Jewell 2008). This species has also been known to inhabit buildings and other man-made structures. Remarkably, one population has been recorded from a tiny, barren rock stack that is mostly bare rock with a few shrubs. This rock stack also has a dense colony of seals. On Kundy Island/ Kani, cloudy geckos appear to prefer old Olearia trees that have plenty of cavities, overhanging bark, and plenty of vegetation such as Blechnum ferns around the base.

Many Mokopirirakau species are known for being relatively solitary, however, cloudy geckos have been found in extremely high densities/aggregations on some predator-free offshore islands in artificial habitat (man-made structures). As is the case with other Mokopirirakau it is theorised that males likely show aggression to other males during the breeding season. Neonates (babies) are independent at birth.

As with all of Aotearoa's gecko species, the cloudy gecko is viviparous, giving birth to one or two live young either annually or biennially (once every two years). Mating in Mokopirirakau may seem rather violent with the male repeatedly biting the female around the neck and head area. Sexual maturity is probably reached between 1.5 to 2 years as with other Mokopirirakau, however, it may take up to 4 years in alpine populations.

Cloudy geckos are omnivores. They are primarily insectivorous in nature, but are also known to feed on the nectar, and small fruits of several plant species when they are seasonally available. Lowland populations, due to their arboreal tendencies, are likely to incorporate flying insects (moths, flies, beetles, etc.), and small spiders into their diet, whilst alpine populations probably focus almost exclusively on terrestrial prey (crickets/grasshoppers, ground-dwelling beetles, and some moth species).

DOC classify the species as 'At risk: relict' (Hitchmough et al. 2021). Cloudy geckos are not being actively managed and are present in moderate-high numbers on multiple predator-free offshore islands. Accordingly, they are at no immediate risk of extinction. Monitoring and surveys have been conducted to learn more about this species. Future surveys could be targeted at mainland Stewart Island, as cloudy geckos are seldom seen there.

The holotype specimen was collected in a birds nest approximately 13 feet from the ground (McCann 1955). 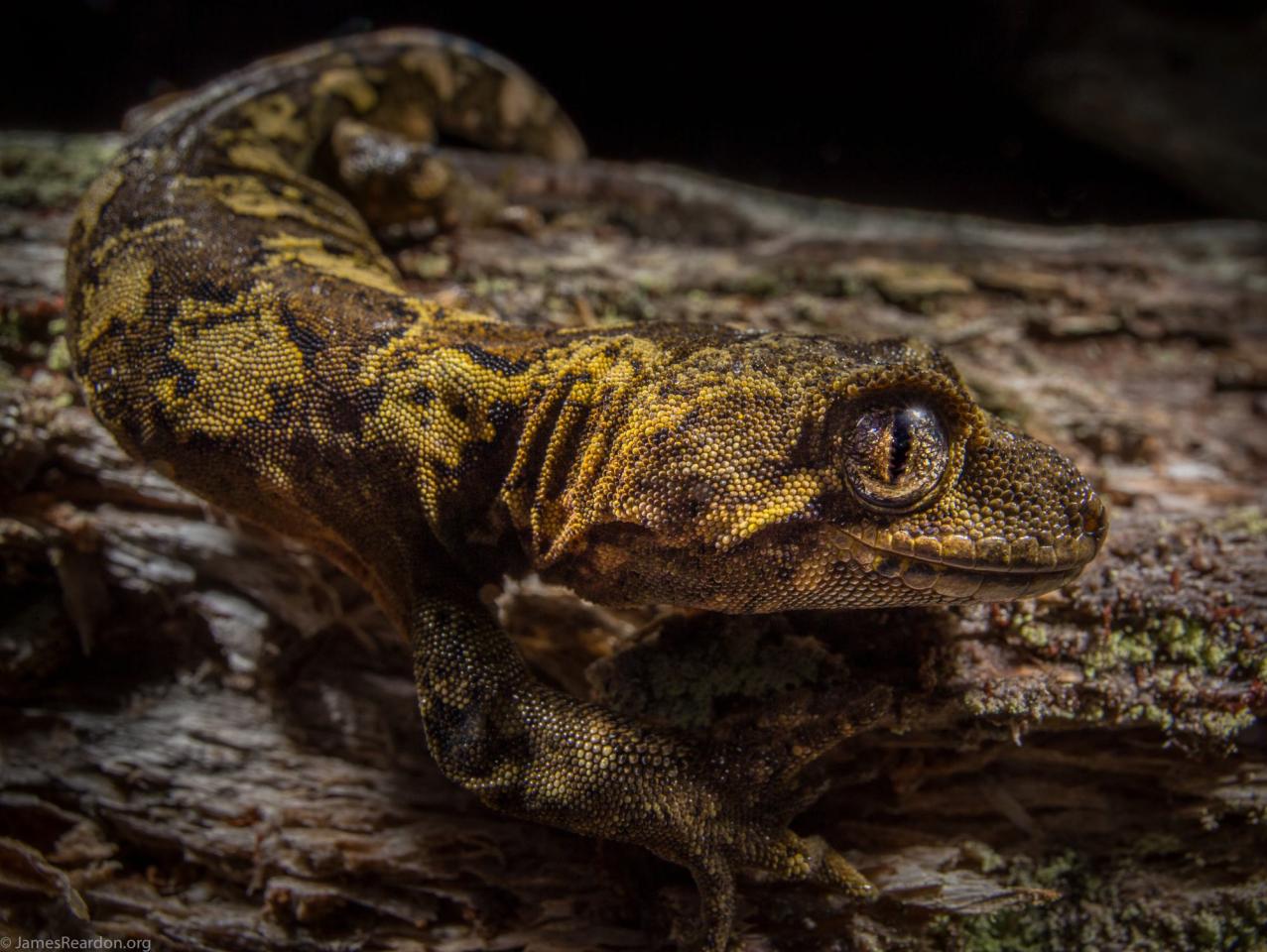 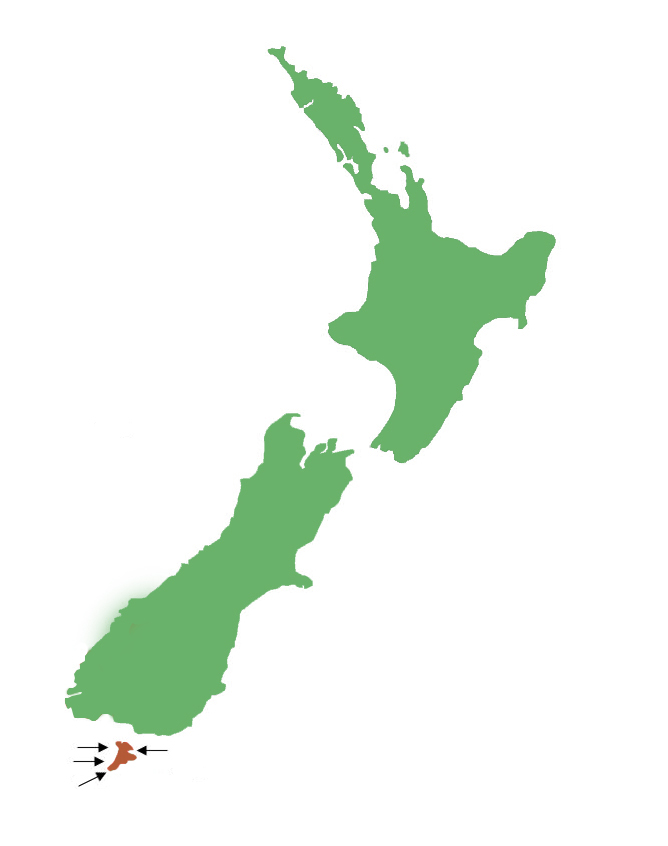 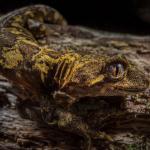 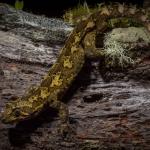 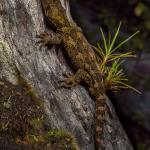