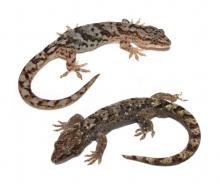 Geckos from the genus Woodworthia were formerly regarded as a single highly variable species - the 'common' gecko (Hoplodactylus maculatus). Genetic work has show that this group comprises over a dozen species which are regionally distributed around New Zealand.

'Common' geckos have proven relatively hardy in captivity, but are strictly nocturnal so keepers are most likely to observe them out at night or (rarely) cryptically basking near a retreat.