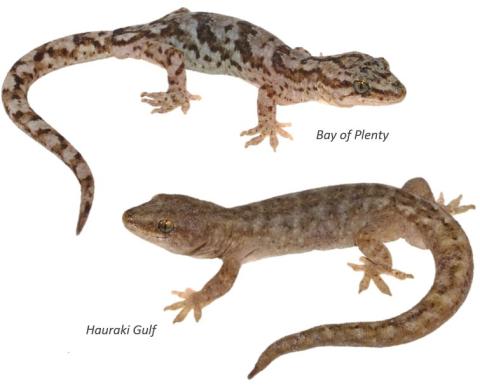 Length: SVL up to 89mm, with the tail being equal to or longer than the body length

A widespread, and predominantly ground-dwelling gecko, known for its diverse rock/lichen-like colouration, and patterning. Generally, this is the first species of gecko many of us will come across in the wild (particularly in the North Island) given its terrestrial nature (can be found under things on the ground), and wide distribution (northern South Island, through to eastern Northland (Bay of Islands).

The Raukawa gecko is characterised by its largely grey to brown, rock-like dorsal colouration, which may be broken up by black speckling or irregular lichen-like markings, which primarily consist of a mix of black, white, yellow/orange, and olive green patches. As with many other gecko species these may appear as transverse (blotches or bands), or longitudinal (stripes) markings.
The lateral surfaces of the gecko are much the same as the dorsal surfaces, although, a canthal stripe (between the nostril and eye) may or may not be present on the face.
The ventral (lower) surfaces are usually plain and pale but may have light grey flecking in some individuals.
The Raukawa gecko is also characterised by a pink mouth colouration with a pink/grey tongue.
In comparison to most of our gecko fauna which are fairly arboreal (tree-dwelling) in nature, the Raukawa gecko spends a significant amount of time on the ground, and as such its toe pads appear much thicker than the gracile toes of other genera (e.g., Naultinus, Mokopirirakau, and, Dactylocnemis).

May be confused with the co-occurring forest (Mokopirirakau granulatus), and ngahere geckos (Mokopirirakau "southern North Island"), but in general can be distinguished based on toe shape - thick stubby toes (versus gracile toes), mouth colour - pink (versus orange), and pattern (North Island Mokopirirakau generally have several W-shaped markings running the length of the back, whereas Raukawa geckos generally do not).
May also be confused with the co-occurring Pacific gecko (Dactylocnemis pacificus) in the northern North Island, but can be distinguished based on toe shape (similar to Mokopirirakau), as well as by the position of the rostral scale, with it being separated from the nostril in Raukawa geckos, but in broad contact with them in Pacific geckos.

Click here for more information on how common gecko differ in appearance to other species within the Woodworthia complex.

Like many of Aotearoa's gecko species, Raukawa geckos are thought to have relatively long life spans. A closely-related species, the Waitaha gecko (Woodworthia cf. brunnea) has been reported living 50+ years in the wild, whilst captive records for Raukawa geckos suggest a life span of at least 37 years.

Widely distributed throughout the North Island, and the north-western South Island. Strongly associated with coastal habitats throughout their range, but almost exclusively associated with them in the north-eastern North Island, being essentially coastal from the Bay of Islands through to the Bay of Plenty. South of this their distribution pushes further inland, with populations found along the North Islands main fault line from the Urewera's, and Raukumara's, through the Central Plateau, and out to Whanganui. Absent from the North Island's west coast north of the Whanganui River.
In the South Island, Raukawa geckos are confined to the Marlborough, Nelson / Tasman, and West Coast regions.

Raukawa geckos are nocturnal in nature, but are known to cryptically bask at the edges of retreats (often only partially out of cover). As with all members of the Woodworthia genus they are considered terrestrial, and for the most part saxicolous (rock-dwelling) in nature, however, many populations are semi-arboreal in nature, and can often be seen hunting for prey or searching for nectar on the trunks, and foliage of shrubs and trees.

Due to their terrestrial and saxicolous nature, they are often associated with rocky habitats throughout the country, however, they can actually be found in a vast array of habitats, from sandy or rocky coastlines right through to inland beech and broadleaf forests.

The Raukawa gecko, as with many of our Woodworthia, is a highly gregarious species which can be found forming large aggregations where suitable refugia are present. However, males have been known to be territorial, particularly during the breeding season.

Like all of Aotearoa's gecko species, the Raukawa gecko is viviparous, giving birth to one or two live young annually in late Summer. As is the case with many lizard species, mating may seem rather violent with the male repeatedly biting the female around the neck and head area. Sexual maturity is reached between 1.5 to 2 years.

The Raukawa gecko, as with many of our other Woodworthia species, is a host for several species of endoparasitic nematodes in the Skrjabinodon genus, as well as at least one strain of Salmonella. The Raukawa gecko is also known to be a host for several ectoparasitic mites including Geckobia haplodactyli, Neotrombicula naultini, Microtrombicula hoplodactyla, and Ophionyssus galeotes
Wild Woodworthia have been found with pseudobuphthalmos (build-up of liquid in the spectacle of the eye) as well as Disecdysis (shedding issues).
In addition to the above, they are known to suffer from several common reptile diseases including black spot fungi, ulcerative dermatitis, mycotic pneumonitis and mycotic septicaemia.

Listed in the most recent threat classification as 'Not Threatened' due to their fairly large and stable nationwide population.

Raukawa geckos are one of the most widespread species of Woodworthia, with their distribution including the majority of the North Island, as well as the Cook Strait Islands,  Marlborough Sounds and northern South Island. Interestingly at the northern extent of their range - lower Northland to the Bay of Plenty - they are primarily associated with coastal habitats. It has been suggested that this pattern of distribution may be a result of interspecific competition with Pacific geckos (Dactylocnemis pacificus) - a species that shares similarities in its ecology and overlaps within this region (pers.comm Tim Harker).

Raukawa geckos are members of the 'common gecko' complex, a group of closely related species which are regionally distributed throughout New Zealand. Historically, most of these were considered a single highly-variable species - Hoplodactylus maculatus (the so called 'common gecko'). The 'common gecko' has now been separated into over ten different species. 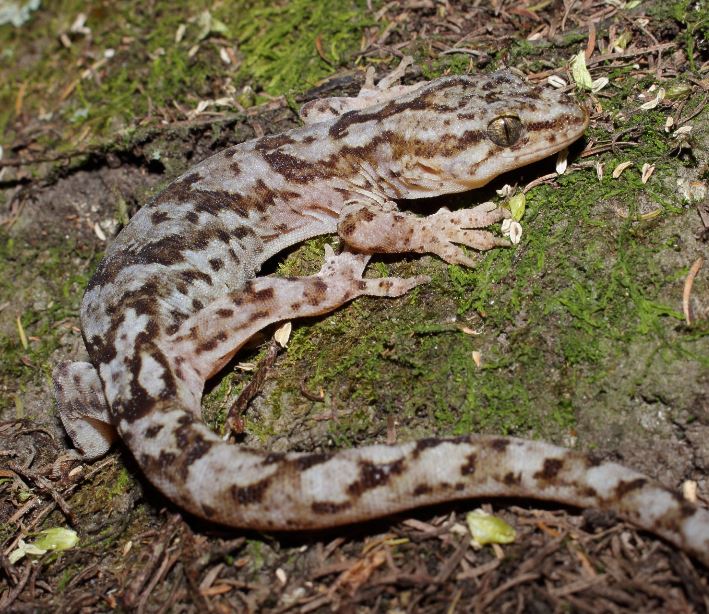 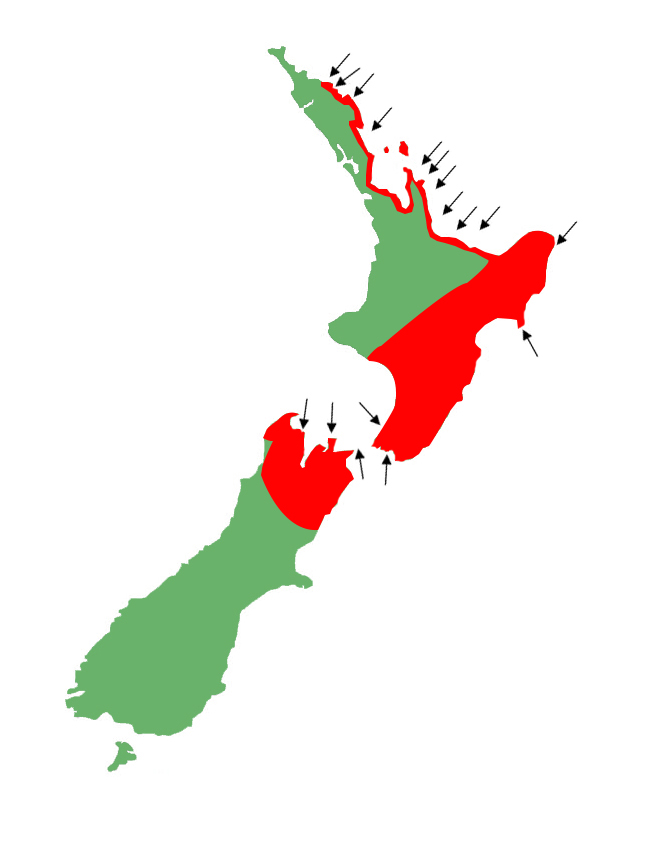 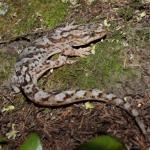 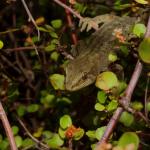 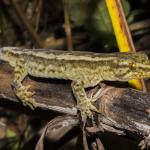 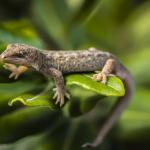 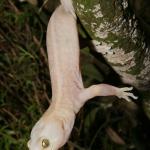 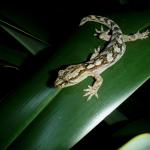 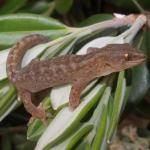 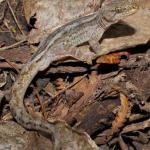 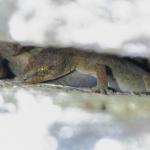 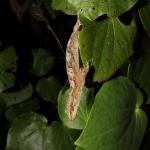 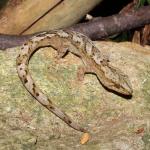 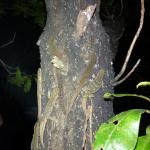 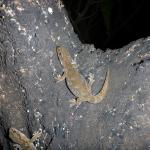 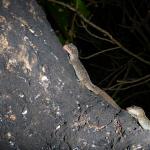 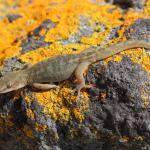 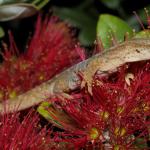 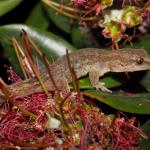 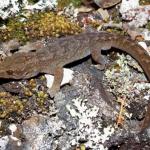 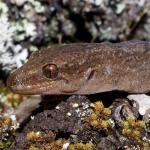 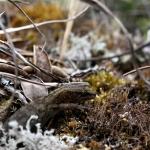 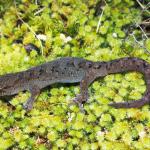 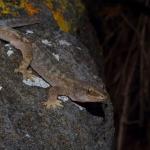 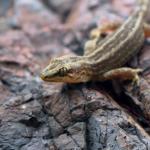