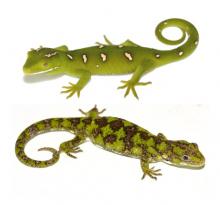 New Zealand green geckos (Naultinus spp.) are a group of primarily arboreal lizards. They are unusual for geckos in that they are diurnal (active during the day).

The genus Naultinus comprises nine closely-related species, they should be maintained separately in captive situations to avoid the very high risk of hybridisation. Their enclosure / set up used should reflect their arboreal nature and include plants with a dense foliage, which they show a preference for in the wild. In the wild, green geckos are largely solitary, so in captivity (if breeding is intended) it is best to house these animals as either pairs or groups of one male and up to two females. Housing of multiple males together will usually lead to fighting, which can result in serious injury or death for one of the occupants.