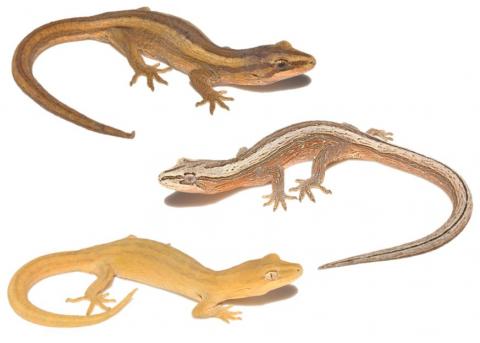 Length: SVL up to 85mm, with the tail being equal to or longer than the body length

A beautiful gecko with a unique pattern of stripes restricted to several islands in the Marlborough Sounds.

This species, as with other Toropuku, is characterised by their light to dark tan dorsal (upper) surfaces, which are bisected by wide pale stripes (white through to light brown/tan) running down either side of the spine. These stripes may be clean-edged or indented by mid-dorsal chevron patterning and converge to a single line along the tail. The lateral surfaces (sides) can vary widely from tan-coloured to vibrant tones of red, coral-pink or yellow. A dark brown canthal stripe (stripe between the nostril and eye) is present and joins the dark band underlining the pale dorsal stripes. A second dark brown stripe runs diagonally between the lower eye and the earhole. Ventral (lower) surfaces range from off-white to light brown and are often streaked in appearance, with fine dark flecks or spots. Their eyes are grey but may appear brown due to the intense vein-like patterning around the pupil. The mouth and tongue colour are pink, although the tip of the tongue may be darker in pigment, and the edges of the mouth may have an orange tinge. The toes are gracile in appearance.

Takapourewa / Stephens Island and Te Pākeka / Maud Island in the Marlborough Sounds. Translocated from Maud island to another island in the Pelorus Sound during 2019. A third remnant population was discovered in the Queen Charlotte sound during DOC lizard surveys in 2020.

Arboreal and nocturnal. Striped geckos inhabit forest and scrub habitats. On Maud Island, the species occurs in a remnant Kokekohe (Dysoxylum spectabile) forest but is most commonly encountered in patches of NZ flax (Phormium tenax) and bracken fern (Pteridium esculentum) where they can form dense populations of over ~200 per hectare (Nick Harker personal communication, March 3, 2019).

Southern striped geckos are nocturnal. On Maud Island, they are most readily encountered on warm, humid nights either during or just after light precipitation.

Striped geckos are elusive, with their social structure and behaviour largely unknown. They are thought to be largely solitary, although can form dense colonies in flax or bracken fern.

Captive northern striped gecko (T. inexpectatus) do not show the same level of territorial fighting as other species of gecko, with two males able to coexist in the same enclosure with no aggressive behaviour and only one case of behavioural suppression in a juvenile female (D.R.H. Ashby, personal communication, October 11, 2016). Females will sunbathe in close proximity to each other.

Like all of Aotearoa's gecko species, the southern striped gecko is viviparous, giving birth to one or two live young biennially (once every two years) around late summer/early autumn. As is the case with many lizard species, mating in Toropuku may seem rather violent with the male repeatedly biting the female around the neck and head area. Sexual maturity is likely reached between 1.5 to 2 years.

Southern striped geckos are omnivores. They are primarily insectivorous in nature, but are also thought to feed on the nectar, and small fruits of several plant species, and the honeydew of scale insects when they are seasonally available. Having both arboreal and terrestrial tendencies, this species utilises the food sources in both habitats, preying on a mix of flying (moths, flies, beetles) and terrestrial invertebrates (wēta, grasshoppers, beetles, etc.).

In captivity, a close relative - the northern striped gecko (T. inexpectatus) - has been observed actively hunting, although, shows more caution and stealth than other native species such as Duvaucel’s gecko (Hoplodactylus duvaucelii) and green geckos (Naultinus spp.) (D.R.H. Ashby, personal communication, September 20, 2016). In captivity northern striped gecko feed on a wide range of winged insects, including lacewings and dobsonfly, as well as fruit.

A conservation translocation of southern striped geckos was undertaken in February 2018 whereby 100 striped geckos were caught on Te Pākeka / Maud Island and released onto another island nearby, to establish an additional population of this threatened species.

Named after Takapourewa - Stephen’s Island, where the species was first discovered.

A second population was discovered by members of the forest and bird protection society on Te Pākeka / Maud Island in 1989.

A third remnant population was discovered in Queen Charlotte Sound during DOC lizard surveys in 2020 (Nick Harker personal communication, January 2020). Given the geographic separation of this population from those in Pelorus Sound, it is possible there may be remnant populations at other sites (on islands or the mainland), which have remained undetected. 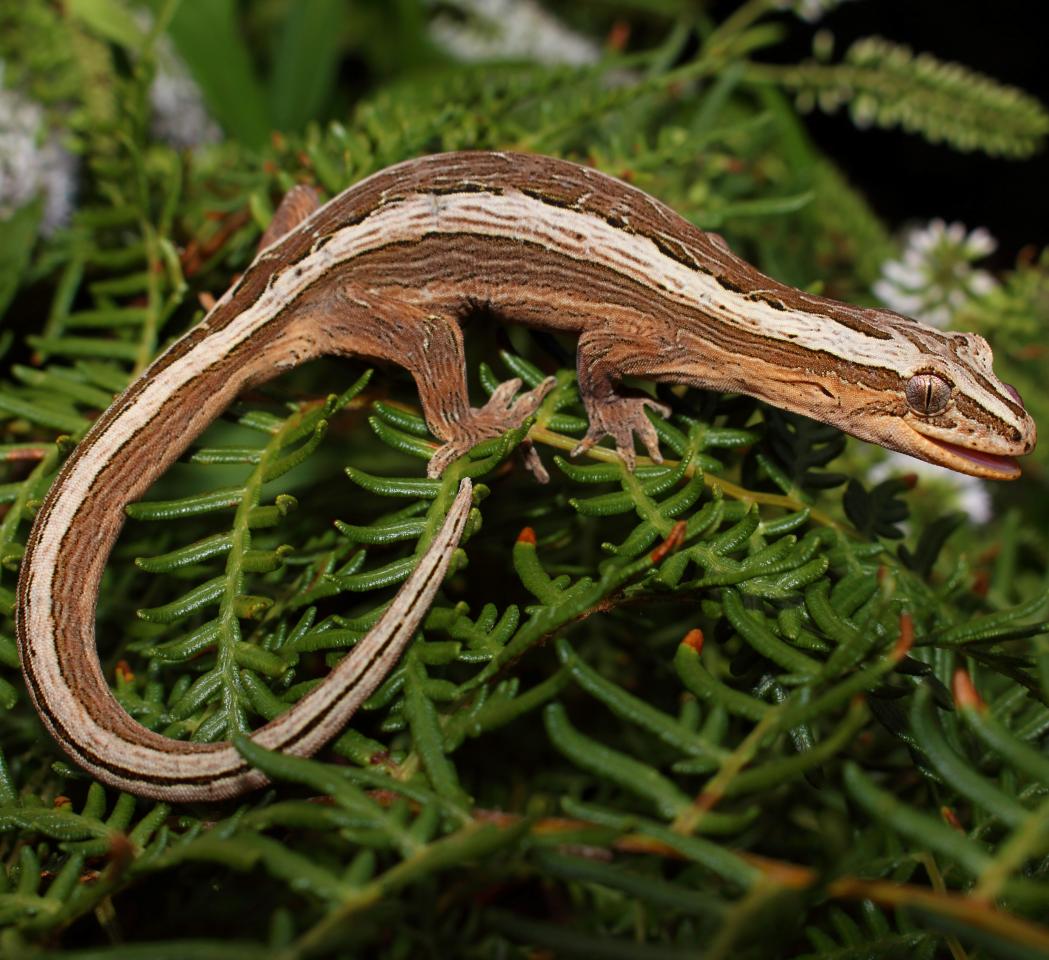 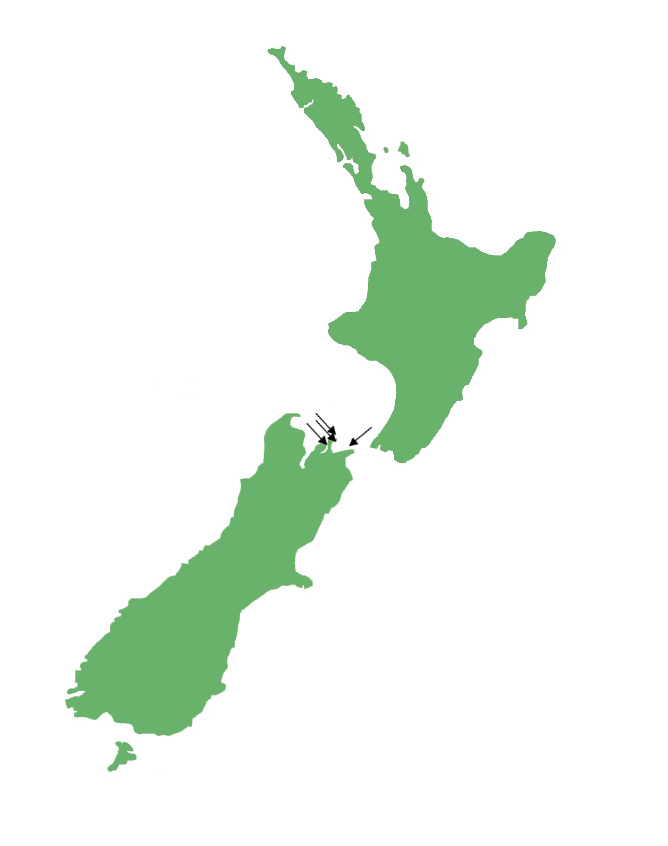 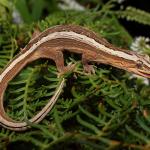 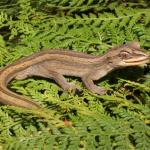 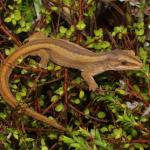 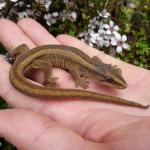 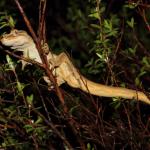 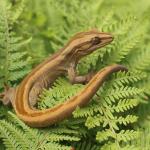 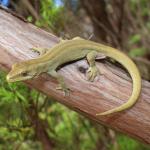