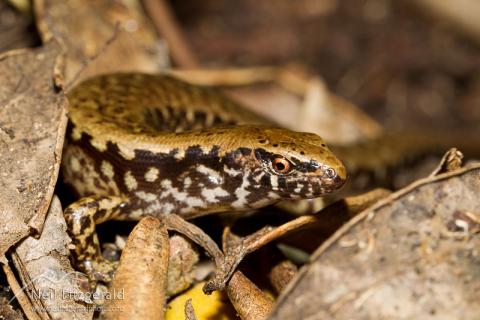 Length: SVL up to 116mm, with the tail being equal to or longer than the body length

A large, and enigmatic skink species endemic to the isolated Poor Knights Islands off the coast of Northland. Although a close relative of the Hauraki (Oligosoma townsi), Coromandel (Oligosoma pachysomaticum), and Whitaker's skinks (Oligosoma whitakeri), they have remained isolated from them for around 2 million years, becoming larger, and filling the niche that larger skinks (e.g., robust skink (Oligosoma alani), and Falla's skink (Oligosoma fallai)) do on other small island groups.

They are characterised by their light brown dorsal (upper) surfaces, which on occasion are flecked with washed-out patches of dark brown/black, and lighter brown pigments. The lateral surfaces (sides) have a marbled appearance, comprising a patchwork of dark grey to black markings and irregular white patches. This pattern is concentrated on the front half, particularly around the face and neck, and often becomes more washed out towards the rear (particularly in older animals). A ‘tear-drop’ marking is present under each eye (white with black edging), with the remainder of the ‘lips’ being completely black, apart from occasional small white markings. The ventral surface (stomach) is cream with broad dark blotches, whilst the throat is white with heavy black speckling or streaks.

Largely unknown, however, other Oligosoma species have been recorded reaching ages of over ten years in the wild, whilst the closely-related Whitaker's skink (Oligosoma whitakeri) has been reported to live for 55+ years in captivity (D. Keall, personal communication, May 22, 2021).

Marbled skinks are restricted to several islands and rock stacks in the Poor Knights group, off the coast of Northland.

The marbled skink is nocturnal in nature, with crepuscular (dawn and dusk) tendencies, although gravid females are known to bask during the day. As with most Oligosoma, they are terrestrial (ground-dwelling), spending the majority of their time foraging on the forest floor.

The marbled skink is generally considered to be solitary in nature, although they may be found inhabiting the same refugia as congeners. Males are likely to show aggressive behaviour towards other males, especially during the breeding season. Neonates (babies) are independent at birth.

Like the majority of Aotearoa's skink species, the marbled skink is viviparous, giving birth to 2-4 live young around March/April. As is the case with many lizard species, mating in Oligosoma may seem rather violent with the male repeatedly biting the female around the neck and head area. Sexual maturity is probably reached between 2-4 years.

Marbled skinks are omnivores. They are primarily insectivorous in nature, but are known to feed on the nectar, and small fruits of several plant species when they are seasonally available. Being terrestrial in nature, their invertebrate prey tends to be predominantly composed of ground beetles, spiders, weta, and other ground-dwelling invertebrates. They have been recorded feeding on the fruit and berries of Coprosma species, kawakawa (Macropiper excelsum), and small-flowered nightshade (Solanum nodiflorum).

DOC classify this species as 'At Risk - Naturally Uncommon' (Hitchmough et al. 2021), due to their small natural range. Marbled skinks are not being actively managed and are present in moderate to high numbers on islands within the Poor Knights group. Accordingly, they are at no immediate risk of extinction.

Named after the former Director of the Dominion Museum, Dr W.R.B. Oliver. Accordingly, marbled skinks are sometimes referred to as Oliver’s skink.

The marbled skink species-complex has proven especially difficult to resolve because genetic traits have often suggested a different evolutionary scenario than what other (morphological, ecological and biogeographical) traits imply, and as a result the taxonomy of the complex has been much debated and somewhat unstable for the past thirty years. The definition of the marbled skink has thus changed from its original concept of a Poor Knights Islands endemic (McCann 1955), to a species widespread among various islands from the Poor Knights south to the Coromandel Peninsula area (Hardy 1977), to one found on the Poor Knights and Coromandel areas but not in between (Chapple et al. 2008), and eventually back to its original Poor Knights Islands only concept (Jewell 2019).

Hardy, G. S. (1979). The karyotypes of two scincid lizards, and their bearing on relationships in genus Leiolopisma and its relatives (Scincidae: Lygosominae). New Zealand Journal of Zoology, 6(4), 609-612. 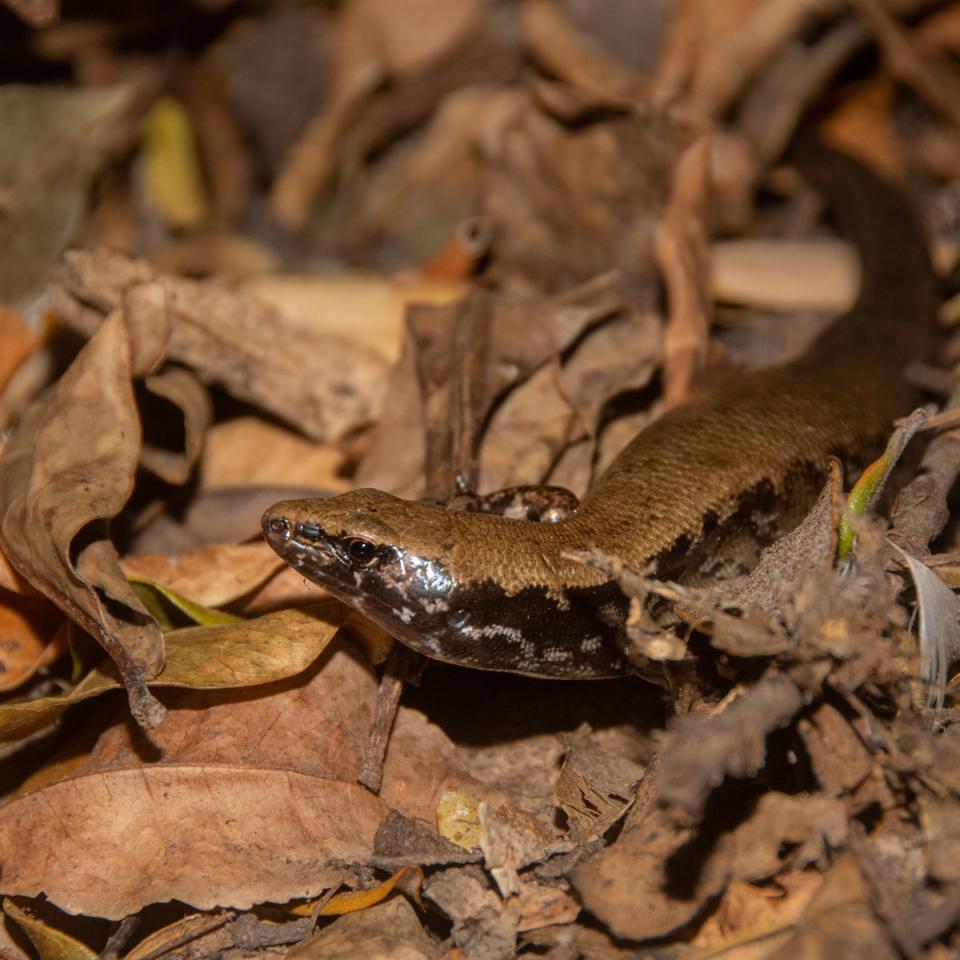 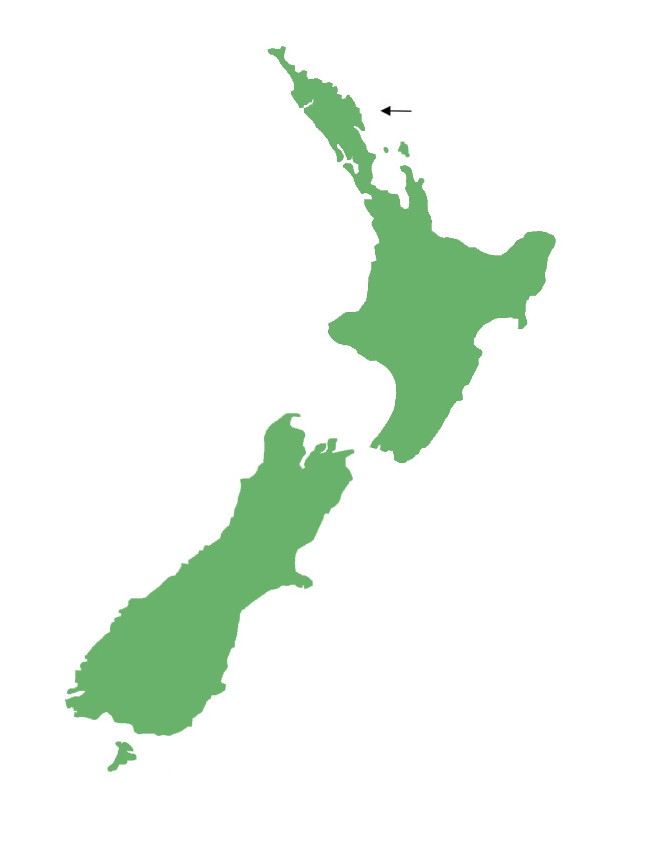 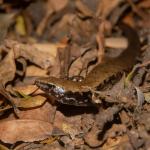 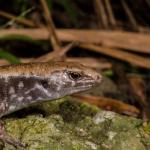 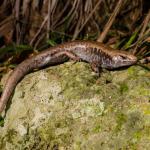 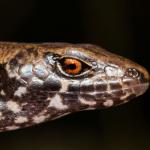 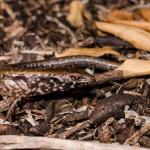 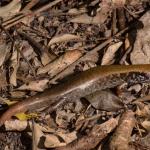 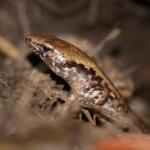 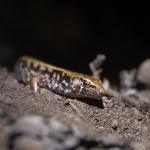 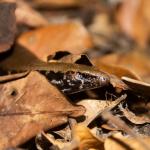